Excerpt from In Season: A Sense of Community

Everything is too shiny and too new
so the old women huddled at the corner table stand out
in the way all tedious and determined old women
stand out – they have long accepted
the disappearance of youth and power.
But still they linger here
in a town whose borders have not changed
though they have watched their own
gradually sag and wither away, bits and pieces
of body and memory blowing away
in a cold November wind
that seems colder by comparison
than the ones they lived through
when their backs were straight
and their eyes were clear
and the faces of the other women around them
looked forward to the unknown adventure of a long life
instead of the cold solace that a grandchild has promised
to bring fresh flowers to her grave each Spring
and that the picture the newspaper will use
to announce her obituary is one in which
her hair looks nice and one she remembered
to put her teeth in for.
Posted by DirtySacred at 10:38 AM Links to this post
Email ThisBlogThis!Share to TwitterShare to FacebookShare to Pinterest
Labels: poem, poetry

Quote From IN SEASON ... a novel in progress

"I've started to think of what I do less as journalism and more like anthropological research. I'm not young enough to assume I know everything and not old enough to realize that there's nothing worth knowing; there's so much I don't understand. I don't understand how Cincinnati sports teams defeat themselves in spite of colossal talent; I don't understand how George W. Bush won two elections; I don't understand people that think Hillary Clinton or Sarah Palin are fuckable. And when it comes down to it, I still don't understand people, or why I always feel like I'm living in a fish bowl. There's this layer of something between me and other people, and it's always been this way."  -- JJ Rafferty
Posted by DirtySacred at 10:55 AM Links to this post
Email ThisBlogThis!Share to TwitterShare to FacebookShare to Pinterest
Labels: Fiction. Novel, Quote

Conversation With Carlos: A New Collection of Poems, now available for your Kindle! 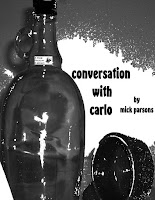 Only $2.99.  Download in around a minute for your Kindle or your Kindle app (PC, mac, iphone, etc).
Posted by DirtySacred at 10:51 AM Links to this post
Email ThisBlogThis!Share to TwitterShare to FacebookShare to Pinterest
Labels: Dead Machine E-Editions

Excerpt from In Season: Nada

Excerpt from In Season: The Nuclear Option

Between the scratch I bring in and her salary, we can get by about as well as we've ever gotten by. Catching up is a distant dream, and one that I don't think about very often. Too depressing. Maude thinks about it a lot; she has her third eye focused on that ethereal moment you see in stock broker commercials during the Sunday morning talk shows. Lately I've begun to feel like I'm letting her down. She hasn't said anything like that; but the weight is still there, bearing down on us both. I'm starting to wonder about her old age, how she'll live, how we'll get by. I don't worry about myself so much because I figure I'll keep going until I collapse on the street; maybe still writing about chili cook offs, maybe mumbling to myself and scribbling odd two line poems on the back of fast food wrappers. And I'm really okay with that … for me. But Maude deserves more. It's just difficult for me to see that far forward.
When I don't have anything on the burner to write about, that means foraging: which is by far the most meaningful part of my job. I think of it as loafing with purpose. That means I hang around looking useless, eavesdrop on conversations, pay attention to local gossip. One of the problems with being a small town freelance hack is that most of the news isn't really new. Everybody knows what's going on before the paper even comes out on Wednesday; so it's not really a matter of informing people as much as confirming what they've already heard. This frustrated me, initially. But once I realized that I was under no real obligation to inform anybody of anything, I was free to write about whatever I could find that was timely and interesting. The highest hope I have is that I can at least dispel the inevitable hearsay that's a part of every well-established ear-to-ear gossip network. This may not be the kind of illumination I always looked for in poetry; but it's something.
Then I figured out that no one really read the paper except to get the high school football, basketball (boys) and baseball scores.
But in a way it was also a liberating experience to realize that regardless of whatever got printed in the paper from one week to the next, people most likely choose to believe the shit they overheard in the line at Blaine's Farm and Fleet instead of anything I carefully researched. Then I came to understand that the issue was not that I wrote it as a member of “the liberal media”, or that it was too honest, or even that they saw my articles as an out and out lie. The major hurtling point was that I actually took the time to research it instead of just talking to the Pharmacist or getting my facts from the grizzly old bastards who ate lunch every week day at the Moose Head. They sat around this one large round table, where they were often joined by the County Clerk – who had the clarity of mind to get most of his opinions and at least half of his ideas from the eight men sitting at that table – and called themselves the Round Table. Most of them were round, too... though that had less to do with the table and more to do with a diet consisting of fried food, salt, and shit beer. They meet each work day at noon for the lunch hour, order whatever the special is for that day (Monday Chili and Fritos, Tuesday Tacos, Wednesday Open-Faced Pork, Thursday Pizza Burgers, Friday Fried Fish Sandwich) and solve all the world's problems. They loved politics and especially loved that each of them agreed with one another on three basic tenets:
Their solutions for all the world's problems: war, poverty, the national debt, the educational crisis, gun control, or anything else not listed, were as uncomplicated as they were predictable:
As a matter of fact, they often sat and talked about the advantages of full scale nuclear war, which they saw as the sum total solution to all the world's problems:
It took them the entire hour to actually say these things. Or things suspiciously similar.
Not much going on, and I still had some cash and nothing to do. It was important that I be productive, that whatever I do that day in some way relate to getting paid; I decided last night that I would get work done, no matter what.
It's harder than people think... not working. You drop a enough points below the poverty line and you have to be smart. Sneaky. Like being turn a few pennies into a hamburger. Or being able to turn the money for one scotch on the rocks into several cocktails and maybe a beer or two. It requires finesse. And if I was careful, I might be able to extend my scotch and get a story or two for the week, and earn a little scratch.
That, I told myself, was all I really expected from a good day. That, and a night of restful sleep.

But I have to get through today first. And then... we'll see what happens.
Posted by DirtySacred at 9:43 PM Links to this post
Email ThisBlogThis!Share to TwitterShare to FacebookShare to Pinterest
Labels: Excerpt, fiction, novel

Essay: Of Love and Football

Excerpt from In Season: The Burn

Excerpt from: In Season -- Taking Stock

The Main Street ninnies say
she lives in an abandoned truck camper
down the way and she
only walks into town
every other day or so
for a half case of beer
and another pack of cigarettes. Everyone
remembers her when she went to high school
and insist they knew even then
the girl would amount to nothing. Then
she confirmed their judgments,
got mixed up
with one of the Boyd Brothers
got herself pregnant
before her 16th birthday,
was kicked out of her mother's trailer
(that wasn't much of a home anyway, people say)
and was left on her own
because in a town like this
you reap what you sow –
especially if your last name
isn't one
that people respect
before they meet you. She doesn't work
and her son
is in grade school now,
but lives with some other family;
and people suspect she's a whore
though no one in town
will go to see her
and no one knows how
she will make it through the winter.
Posted by DirtySacred at 11:30 AM Links to this post
Email ThisBlogThis!Share to TwitterShare to FacebookShare to Pinterest
Labels: poem, poetry
Newer Posts Older Posts Home
Subscribe to: Posts (Atom)