The more history I read and the more I consider our present circumstances, the more I think I live in Bizarro World.

For those of you who are not imminently COOL enough to know what I'm talking about, I am referring to the cube shaped planet Htrae, where Superman's block-headed alter opposite Bizarro lives:

Because everything on Bizarro World has to be opposite of everything on Earth, this -- again for those of you not comic book inclined -- is a copy of the Bizarro Code:


The implication, of course, is that everything done on our planet is perfect -- or at least, our goal to try and get as close as possible.  And of course, in 1960's comic-speak by PLANET, they mean THE UNITED STATES.

After some deliberation, I've come to the conclusion that if I'm supposed to live in a world where beauty and perfection are the goals, then I'm in the wrong one. As a matter of fact, it seems as if the highest goals and deepest desires of the planet -- and by the planet I mean THE UNITED STATES  -- are the exact OPPOSITE of any attempt to attain beauty, truth, or perfection.

Thus, I can only conclude that I currently reside on Bizarro World.

Because only on a planet such as Bizarro World could Labor Day pass with little or no attention paid to the fact that celebrating Labor -- that is, the Labor Movement -- has more to do with the holiday than fireworks and barbecues. Neither The History Channel, nor The Documentary Channel showed anything about people who work, the history of labor in this country, or the struggle for workers rights and the legalized murder of labor martyrs like Joe Hill and Albert Parsons -- just to name 2; and given the current drive by Tea Baggers, lily-livered Libertarians, GOP'ers, and spineless Democrats to further undercut unions in this country, I sort of thought that maybe one of them might have run something. I don't think PBS even ran anything, either.

The only national news item that ran about Labor was Teamster President James Hoffa calling the Tea Party a bunch of "sons of bitches." Of course, Fox News -- trying, I guess, to distract attention from Der Fuhrer Rupert Murdoch's problems  -- had to give the TB'ers yet another platform by covering the the drippers' condemnation of Hoffa's comments.

On the other hand, I'm not really surprised. Since we are clearly a country of people who have forgotten our history -- accepting, instead, the sanitized, glamorized, homogenized version sold to us in history textbooks -- it's no wonder that we are repeating it.

But since I am clearly on Bizarro World, I should point out one of it's key inhabitants. And no, I don't mean Bizarro Superman, or even Ambush Bug.

The sad part about liking comic books is the realization that in real life there are no super heroes swooping down to save us. Institutions of government and religion and of higher learning have failed us.

That means it's up to us.

Or, you could wait on Ambush Bug. 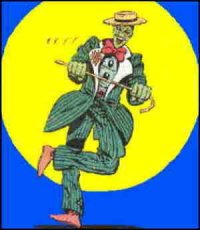