Baboon in the Bluegrass, Intermezzo 1: Cupid Is a Sadist

"Let me not to the marriage of true minds
Admit impediments." -Shakespeare


“Love is all right for those who can handle the psychic overload. It's like trying to carry a full garbage can on your back over a rushing river of piss.”
― Charles Bukowski


Love stories are fraudulent, sentimental tripe -- which is why I don't, as a general rule, write them. Sure, I've written my share of love poetry; but poetry about love, like reality TV about self-important morons, isn't all that unusual.


The thing about love poetry -- in spite of how many people rehash "Shall I compare thee to a summer's day" -- is that it lives in a moment and is gone again. That's the nature of poetry. That's the nature of love. That people find solace or reflection in a love poem after its moment has passed is only a confirmation of the continuity of human experience. That love has a beginning, a middle, and end is a reflection of the absurdity of the human condition; because even though it ends -- and it always does -- you either split up or one or both of you dies. Either way, the shelf life of love is terminal and short -- so it is with life.

That's the problem with telling love stories. No one wants them to end. And with Valentine's Day approaching... perhaps the most ridiculous, Capitalistic, and conspiratorial holidays on the U.S. calender... it's important to realize that all love stories end. They end because they have to.

But that also means they have to begin. And on rare occasions, even though they end, it may be worth the time and space to tell them. When they matter.

When I first met her, she was 18 years old, and a college Freshman. I was a few years older.  I was also trying to excise myself from a  relationship that had gone horribly, tragically wrong. There's nothing particularly interesting about that story, except that then, as always, I had gone into it with the best of intentions. But relationships have always proven problematic for me. For as long as I can remember, I have neither understood how they worked, nor have I have been very good at maintaining them. I also have a tendency towards thickheadedness when it comes to knowing whether a woman is interested in me or just being nice.

And when I met her, this college freshman, I thought she was interested in one of my friends. Past experience had taught me that this was most likely the case. Most women were interested in my friend. He was not only a talented and (some would say) troubled person, but he was -- according to certain women friends of mine -- handsome. Tall, with broad shoulders. Strong jaw. When he was in a good mood -- or in the early turn of a manic phase -- he knew how to be very charming.

Charm wasn't -- and probably isn't -- one of my strongest qualities. So when she came around, I assumed it was for him.  But even so, there was something about this girl -- this spark of an Eastern Kentucky girl that would smile, giggle nervously, ask me serious questions and seem interested in what I had to say -- that felt different. I was nervous around her because she was beautiful: shoulder length reddish-brown hair, blue eyes. But there was something about her that also made me feel ... well ... safe.

Safe. And very confused. I wasn't used to women who made me feel safe. I was used to the most recent dysfunction of my marriage to my daughter's mother. Prior to that, my experience had been severely limited by a painful shyness and social awkwardness that still, on occasion, plagues me -- along with the frustrating thickness in the head about whether women like me or whether they're just being nice. (I always assume the former.)

It wasn't until a mutual friend pointed out her interest in me that it occurred to me that maybe she was being nice to me other than because I was the roommate and she was trying to win me over in the process of chasing after my friend.

The relationship -- if you could call it that -- was a dismal failure, for all of the right reasons. She was young, and coming out of some pretty rough stuff. I was in the process of going through a gut kicking divorce. There wasn't enough of me to invest. And eventually, I ran her off because of my own unique ineptitude to say the right thing at the right time. (Another flaw that plagues me almost daily.)

So it seemed more like destiny than chance when I ran into her again. And not only was I surprised to find that she still wanted to talk to me, but I was also surprised to find that I still felt that sensation -- that sense of safety, warmth, and acceptance. And I found -- I rediscovered -- a woman who has always seen me for who I am, who has never really wanted me to be something other than who I am.

And while the relationship is over -- because all love stories end -- I am grateful for the time. And while there is pain and anger in the parting, I know that when the sense of loss is past, I will be left with gratitude. And while that may not have been my intention... it certainly wasn't what I wanted... that is what I am left with.

And it will have to be enough. 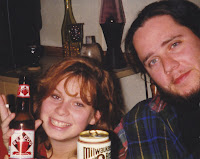 [If you like what you read here, you can help by: