Curiosity is natural to the soul of man and interesting objects have a powerful influence on our affections. -Daniel Boone

Kentucky is one of those places I have a deep and abiding affection for in spite of  not having any real roots here. As I've mentioned before, my daughter, who was born here and hasn't lived here since she was 5 has more of a claim on the place than I do according to conventional wisdom. Stella could return to Morehead, Kentucky at any point in her life and call herself a local because she was born there. On the other hand, I've actually lived in Kentucky and spent more time here than she has; but because I was born on the OTHER side of the Ohio River I will never be counted among the Kentucky's sons.

But, as I've also noted in the past, people from Kentucky -- particularly Eastern Kentucky -- have such a strong connection to the geography that even if I tried to claim Kentucky as a home, I lack a fundamental oneness with the dirt... the mountains, the clay, the rocks.

My dirt, apparently, is elsewhere.
But even the dirt that I can claim is not dirt that I feel any connection to. That, maybe more than the change in my living situation, may explain more why I'm compulsed to go go go. How did Kerouac say it?
"I like too many things and get all confused and hung-up running from one falling star to another till I drop. This is the night, what it does to you. I had nothing to offer anybody except my own confusion."
Not that my traveling has much in common with Kerouac, though people have made mention of On The Road more than several times. I can only assume that because I'm a writer, that I claim the Beats as a literary influence, and that I'm traveling, that they assume I got the idea from reading the book. (In case anyone's wondering, I didn't. And actually, I think Desolation Angels is a better book.)
You can't be a writer at this time and NOT claim the Beats... even if you're writing against the influence of writers like dear Jean-Louis, Ginsberg, Corso, and di Prima. I can't stand anything written by Dreiser. But to say he hasn't had in impact on what I do would be naive and short-sighted. As a matter of fact, I wonder sometimes if writers aren't more influenced by the writing they hate rather than the writing they love.
In spite my lack of connectedness with the geography here, though, it's always nice to be back. And it's always nice to revisit friends. I stayed with Mike and Elizabeth on my last trip through a few months back, and it's always a kick to see them. I was also able to spend some time with friend and fellow writer Misty Skaggs, whose blog is here, and who's worth checking out.
Got in around 5pm Friday after a 9 hour drive from the coast... the idea being that My Dear Sweet Ma would drop me off in Ashland on the way back to Porkopolis. I suspect, however, that we would have gotten to my end destination much more quickly without the help of the on-board GPS giving me directions in an oh so polite slightly British woman's vernacular.

It was actually worse on the trip out to Virginia Beach... tried to take us as far out of the way as possible, but somehow still had no idea where we were when we were on Highway 35 in Eastern Ohio. 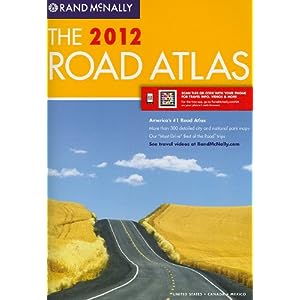 When I had a car I always kept a road atlas somewhere handy.  I may not be able to stand in a wide open field on a cloudy day and tell you what direction I'm facing, but I know how to read a map... which is one of those things that I suspect is being lost in the age of digital travel and permanent GPS tracking. One of the things I noticed -- especially on the way out to Virginia Beach -- is that even when you program your travel preferences in... longest route, shortest route, avoid toll roads, etc.. it still sticks primarily to interstate routes whenever possible. If, while driving, you ignore the dumb bitch (because computers are DUMB. They don't KNOW things. They're programmed. You know. Like members of the Tea Party) the voice will either harangue you into making a u-turn or... if you wait it out... it will eventually "recalculate." Even then, though, there are large pockets of the country that are being lost. And since people rarely travel for its own sake, and have lost a lot of that natural curiosity Daniel Boone seems to have credited us with (maybe it's The Travel Channel's fault?) in addition to not being able to read a map, people are learning to live their lives  corralled by the interstate system,  hyperbarically and hermetically sealed within electronically connected bubbles of their own design.
I have learned, however, that when it comes to travel, I would rather get lost on my own terms than depend on some umbilical connection to a global positioning satellite.
Posted by DirtySacred at 1:00 PM
Email ThisBlogThis!Share to TwitterShare to FacebookShare to Pinterest
Labels: 2012, Ashland, Bluegrass Slingshot, Bluegrass Slingshot Ashland KY: Disappearing Geography, Carter County, Eastern Kentucky, Elliot County, Kentucky, traveling
Location: Ashland, KY 41101, USA
Newer Post Older Post Home