Disappearing Geography: Snapshot Not Yet Developed (a poem) 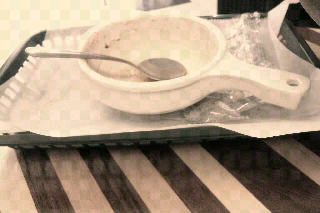 The aging poet by the seaside a bottle of vino on hand
Red like blood, like ink, like the sun
On certain days over the southern hillside.
Shoes and civilized senses abandoned
Scribbling poems on napkins, the back of playbills,
And recently devalued and worthless currencies
In between games dominoes with retired fishermen
And meals of tomato bisque, fresh shell fish and strong coffee.
He speaks only to his wife and a few words to the waiter
When the bottle is empty. Eyes colorless
Like the ocean staring out, recalling some winter
Once, when his children were very small
And still knew how to laugh without bitterness:
Like only the innocent will laugh, not yet knowing
There is never any reason not to laugh.

His poems are pithy epitaphs on the changing world,
Written sometimes in the voice of a young man
And sometimes as a wise old woman.
He searches for a child's voice -- one that will echo
Like a daughter's laughter.

(He refuses to accept it may be impossible to find without moving.)

Fresh young women on the arms of jealous boys
Find him curious. The women push their breasts out,
Hoping bare skin will entice. Meanwhile,
The boys plot his destruction, hiding vicious cowardice
Behind smiles and quick sidelong glances.
Four more bottles before the mid-day meal
Of fresh baked bread and raw oysters on the halfshell, shucked that morning
By three lovely virgins whose dark eyes remind him of Kentucky.

Soon it will be time for a walk down the sand
Hand in hand with his wife
Who has spent the day painting worlds
and inventing new creatures for him to give names to in poems.
Dominoes will keep. The napkins are saved by the waiter
Who sells them to tourists that love them, love is work,
Even though they have lost the art of reading cursive.
They pay for his oysters, his soup, his wine,
And a quiet table facing the sea -

To which he will eventually return and drink wine
Watching the precise spot where the water meets the sky
Searching for the arrival of a quiet, anonymous Death.