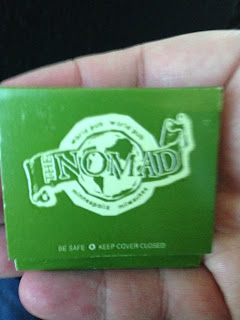 You find such interesting things on the bus.

I couldn't ask for better weather to start Spring Break. And even though the rain rolled in after midnight last night, it was neither violent, nor unwelcome. The sound of rain, like the sound of trains and enough bourbon, help me sleep.
(I hope my friends up in the flood plains of Northwestern Illinois are also faring well this morning... particularly anyone along the Plum River in Carroll County and the immediate area around a certain property adjacent to railroad tracks owned by the Canadian Pacific Railroad. I had heard via the rumor mill that a certain Mr. Parker -- a prominent land owner, volunteer fireman, and disgraced banker who once threatened to sue me for using his name in a well researched article regarding his bog and its part in flooding of 17 homes along the Plum River -- ended up selling the property to the railroad. But since rumors of this nature are a combination of fact, lies, and blind naive optimism, it's difficult to trust without further verification.)
So, well rested as I am on this rainy Monday morning, I thought I'd share a few thoughts on the notion of Spring Break, which don't fail to catch my attention, in the spirit of collegiate professionalism and the socially responsible communication of information that is the watershed mark of any civilized society.
1. Spring Break is earlier than it used to be.
It was once understood that Spring Break coincided with the religious observance  of Easter. While I don't adhere to that particular religious inclination, it does seem unfair to those who worship zombies and egg laying rabbits.
2. This past Sunday (yesterday) was the day when everyplace in the country except for Arizona and a small strip of land in Indiana turn our clocks an hour forward.
The sick and  twisted nature of Daylight Savings Time is commonly known and often complained about; but people still persist in believing, against all logic, that turning a clock an hour forward or back somehow adds to or takes away from the hours in a day.
**Correction and addendum: most people don't change their own clocks anymore. "Smart Phones" have taken on this responsibility for  us.  So, not only is the country deluded about the nature of time and space, we have taken yet another step away personal responsibility by letting our phones be in charge of whether there are 23 or 24 hours in a day.
3. Spring Break, as a concept, only exists for those who teach, or those who are students.
And I was told by one of my students that most of my colleagues in higher education assigned work to be done over the break.
WHAT KIND OF SICK ASSHOLE DOES THAT?
Not only that, but most of my students have jobs, especially since the cost of higher education tends to increase (6% per year on average since 1980) while teacher's wages either stagnate or increase at pace not equal with the increase in tuition.
Related, tangentially, is the fact that while unemployment (in the flawed way the record of is measured and kept) is down, those who are working are having to work longer for less.
One might suppose then, that assigning work over the Break is intended as some life lesson... getting the kiddies accustomed to never getting a chance to breathe, rest, relax, or bask in the sun with a jug of wine and a pliably attractive person they wouldn't mind seeing naked.
In my experience though, that assumes far too much intelligence on the part of the bean counters who run institutions of higher education.
4. On the other hand, scheduling Spring Break to coincide with the annual "Spring Forward" mode of Daylight Savings Time seems to suggest that someone, somewhere, wants to whittle away the little bit of time afforded to students and teachers for rest, relaxation, and naked wine drinking.
This, along with factoid #3 suggests to me that while there may not be an organized plot to make people miserable, there is a widespread and perhaps systemic need to pass on misery, stress, discontent, and thwarted desire.
The solution, Dear Readers, is an obvious one. Find someone you might want to see naked, and -- if you are at all suspicious that they too, want to see you naked -- go in together for a cheap jug of sweet wine. Then go in search of sunshine. Or cozy cover from the rain.
And ignore all that Daylight Savings Time crap. All it was ever intended to do was sell more lightbulbs.
Addendum: Along with that jug of sweet wine, take poetry. For example, a copy of END NOTES FROM THE ATLAS OF DEEP TIME, which is available, conveniently, through this website.
Posted by DirtySacred at 11:27 AM
Email ThisBlogThis!Share to TwitterShare to FacebookShare to Pinterest
Newer Post Older Post Home