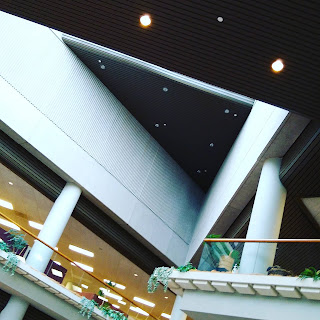 "Well, you're cozy sitting back here with all your friends."

I was surrounded by three empty chairs, all of which were leather, soft, and looked as comfortable as the one I was sitting in. I made some off-handed reply, as one does in those situations. Except for me and the guy recording the event for the University of Kentucky Archives, everyone else there was paired or grouped off.

He introduced himself to me. Later I would find out he was some assistant director or under secretary of Kentucky Workforce, standing in for the director who was unavailable today.

"What brings you here?"

I always find Frankfort to be a beautiful little town in the way that all river towns are beautiful. Nestled up on both sides of the Kentucky River, it's beautiful in the way all river towns are beautiful -- this mixture of old and new, a sense of nostalgia without much in the way of sentiment, and an understated laiz faire attitude about things in general, except for a short list of completely random Things That Actually Matter (Unless They Don't At This Particular Time.)

I'm sitting the coffee shop next to Poor Richard's Books on West Broadway after going out to the Kentucky Library and Archives to watch the inauguration of the 2019-2020 Kentucky Poet Laureate, Jeff Worley. Given that we have a governor who barely reads anything except bible tracts and Ben Shapiro, that we managed to get another poet on the state dime is an extra special pleasure. The Kentucky CoffeeTree Cafe makes a decent cappuccino, has a nice atmosphere with shelves of books, some chairs and couches along with the tables, and variety size of those, too, with even one small table in the back with a single chair for solitary keyboarders and anti-social bibliophiles.

The ceremony out at the Archives was about what I expected. A few speeches and some nice poetry, some of it even read by the poets who wrote it. Right now is the break between the ceremony and the readings of the past and newly minted Poet Laureates, which will be held a few blocks away at the public library. I'll get to listen to the first hour or so of the readings before I need to leave and catch my bus home.

Although I have no part in today's festivities, I wanted to come anyway. Like going to the AWP in Portland this year, I need to start getting to know this part of what my friend George calls (sometimes a bit sardonically) "poet culture." I've paced back and forth for years, stopped at the imaginary border by my anxieties and insecurities. I used to spend a lot of time -- too much time -- drinking and ruminating over whether I really belonged in the same room with these people and being generally resentful if I wasn't ushered in like a dignitary. I removed myself from a conversation and then got pissed off when no one talked to me.

And while I'm a bit too gray in the goatee to be all starry eyed about these kind of things, it was nice that no one gave me the bum's rush. It's never easy being an artist. But it's nice to know that I can, every once in a while, sneak in to the same clubs as the cool kids.
After the new Poet Laureate gave his acceptance speech, I was standing outside waiting on a cab. My new acqauintance, the under secretary, walked by on the way to his car. He asked I enjoyed the ceremony.

"I did," I answered. I was going to go on about how smoothly it went and how I enjoy the brevity and wit of poets. But he nodded in the affirmative and strode off towards his car and towards the next thing on his agenda. As I he pulled out of the parking lot, I stood there waiting for my cab, waiting for the next thing and enjoying the spring air.

If you like what I'm doing, please consider leaving a tip. It helps keep the lights on. Thanks again!