Letters from Trumplandia: Born of the River -- Louisville, Kentucky 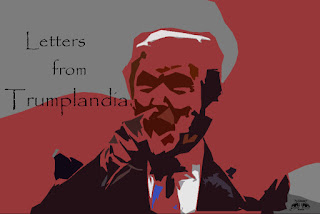 Yesterday, 50 homeless people were displaced in the #compassionatecity. Contemporary urban living means dueling with the cognitive dissonance created by political reality chaffing against the marketing. Bourbon and BBQ for the tourists, for whom the mayor stands, while human beings are treated like the dirty laundry no one wants to deal with.

But this is, I suppose, just one more day in Trumplandia, one more day in the Mayor Greg Fischer's shiny mirage -- the photo op he lives in as he attempts, poorly, to salvage his political legacy.

This wasn't the Louisville blog I wanted to write. I wanted to write in response to a recent call for Belt Publishing -- a publisher I respect, by the way -- for writing for about Louisville for an upcoming anthology. In their call, they refer to Lousiville as a southern city... a mistake that many people make. The local Chamber of Commerce -- otherwise know as Greater Louisville, Inc. -- bills us as a southern city. Local liberals, progressives, and some of the radical left call Louisville a "blue island in a sea of red." All the people whining about the removal of Confederate statues and brandishing the stars and bars as if Kentucky was part of the Confederacy embrace this southern niche with the same vigor that the majority of the country also embraces it.


The truth, with all due respect, is this: Louisville is not a southern city. But it is a river city.
Unfortunately being a river city along the Ohio River means owning the muck that comes with it. Louisville's history of exploiting and isolating populations. The West End and the black community with a botched bussing plan, redlining, and imminent domain. The city's unofficial war against The Russell Neighborhood. Shanty boats. Nativist Know-Nothings and the Bloody Monday Riots. The slave trade. Gentrification. Keep going back. There's more to find. Too much more.

Unfortunately, we are responsible for the muck that comes with it: Economic piracy. Greed. Exploitation. Dehumanization. Because just like the river flows west and into the Mississipi, so does the muck. Inhumanity spreads like a disease, whether it's the city's policy of dehumanizing the homeless or Trumplandia's policy to dehumanize people at the border and put children in concentration camps.

And no, I'm not suggesting all the evil starts here. But some does wash up on shore on it's way.