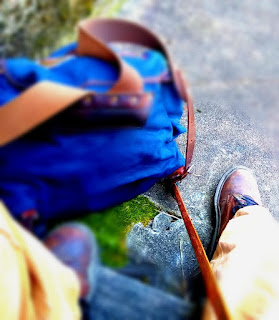 Dad taught me to drive. My experience with driver's education wasn't a particularly good one. My instructor was more interested in his Mountain Dew in cigarettes, and I had to drive with a car load of bullies and other kids from school who didn't like me and would do things like flick my ear and kick the seat, all while the instructor chugged his green pop and chain smoke Basics.

So when it was obvious that I needed more practice before the driving test, he took me out in his 1989 Chevy S-10 Blazer. This was no small thing. He special ordered it from a dealership in Indiana. I remember the day we drove to trade in his truck and pick it up because I remember the cicadas. Walls of fat insects flying hurling themselves against the giant plate glass windows, flying and hurling and either falling dead or bouncing until they fell dead:

on the ground
in a rotten ankle tall pile
of failed cicadas.

And then one of them flew into the Blazer and hid under my seat. The sound it made sounded like it as waiting to devour my kicks.

Dad loved to drive and I think he wanted to be able to share that with me. Because he was sick most of my childhood, there were a lot "father/son" kinds of things we simply weren't able to do.  But I WAS worried, because even though my driving instructor was a bully ignoring, Mountain Dew chugging, chain smoking USE LESS instructor, I did manage to scare him at least twice to the point that he nearly choked on his Pepsi product. And my Dad wasn't exactly KNOWN for his calm nature.

But he talked me out of the driveway and away. He took me down back roads near the house; very little traffic, but narrow and windy in places. And he talked to me about why he liked to drive. It was a chance to let his mind go, he said. He could focus on driving and not have to think about anything, or he could think about things, decompress, or just listen to the radio. Dad was the only adult who had told me it was OK to listen to the radio while you drive.

He never used the word meditation. But that's what it was about for him. A meditation. And yes, I'm sure he also felt those feelings of independence I used to feel when I drove. But he didn't attach driving to his freedom, his masculinity, or his economic status. He drove because he loved to drive.

Thanks for reading! If you like what you've read, please consider clicking on the BE A PATRON or DONATE tabs and showing some love. I'm a working poet and scribe and I believe what I do has value. If you do, too, please support the arts by supporting an artist.
Posted by DirtySacred at 12:52 PM
Email ThisBlogThis!Share to TwitterShare to FacebookShare to Pinterest
Labels: backroads, cars, driver's license, driving, driving instructor, father, Hard skills: driving, lessons, motion, son, travel, vehicles
Location: Louisville, KY, USA
Newer Post Older Post Home