Refrain: A is (still) for Adjunct*

As of this writing, I haven't stepped into a college classroom in a teaching capacity for almost four years.  Although I wrote about my exile and failed attempt to get back in great detail at the time, I haven't really written about it much since.  I think maybe I was too close to it all; too angry about it all; too focused on what I lost beyond a job I cared about -- maybe the last job I really cared about. A job for which I believe I had (and still have) a genuine calling.

Four years after National Adjunct Walk-Out Day and the Louisville Teach-In, very little about the plight of adjuncts has changed. Every late summer or early fall, the same stories, or rehashes of the same stories, cycle through the media. Stories of teachers living in their cars, living on the street, skipping necessary medications and meals in order to do the work they love to do.  Four years after and I'm not angry about it anymore; there's no room for anger when all it does is burn. My anger burned everything around me and almost burned me alive; it almost burned me, but it did nothing to burn down the injustice. I'm past the anger.  All that's left is the story.

And even though I'll be posting bits of it here as it comes, a story has too much weight to just live in the digital world. It's time to bring it forth, like all buried titans. 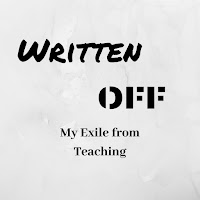 Officially, I separated from the University of Louisville on April 20th 2015, of my own volition. But by then I'd been isolated from my colleagues and been subjected to increased scrutiny by the department.  Everything was fine at UofL until I tried to write an article for LEO Weekly about the working conditions of Part-Time Lecturers, also known as adjuncts.  By that time I'd already been banished from every Kentucky Community and Technical College System (KCTCS) campus after the marketing and legal teams stalked me across social media in order to find the slightest pretext to get rid of me. And why did they even bother with one more disgruntled, underpaid, overworked, and generally exploited adjunct in a statewide community college system?

Because I was the most visible organizer of The Louisville Teach-In: a two-campus educational action in conjunction with National Adjunct Walk Out Day (#NAWD).

Up to this point, the fact that I have all the documentation to back this up hasn't meant much; I did my due diligence. I inundated them with FOIA requests. I gave my story to a local reporter, along with copies of all my findings.  I went to the Kentucky Labor Cabinet. I contacted the National Labor Relations Board. I reached out to at least one fellow colleague, a tenured humanities professor with local status some activist cachet for help. None of it did any good. The reporter wrote a very nice story and did nothing with my FOIA research. The Labor Cabinet was only concerned about whether I was being denied Worker's Compensation, the NLRB informed that because I worked for a public institution, the NLRA didn't cover me, and my esteemed colleague took a pass because he was too worried about fighting for people who already had health insurance (i.e., full-time faculty).  I took it as far as I could without hiring an attorney – which, since I couldn't afford an attorney, meant the end of the road.

Before I even really begin this story, I'm going to tell you how it ends: with me not teaching. Goliath stomped David. The Philistines still run the once golden kingdom.

But it's not that simple, either. It can't be, because this is an American story – one of the few truly American stories, stripped of bootstrap and Manifest Destiny mythos, where the plucky activist  gets steam-rolled by a giant, mindless machine. Maybe not Horatio Alger. But definitely Frank Norris.

And a canary or two.
______________________________
* Title originated from this LEO Weekly article by Laura Snyder
Posted by DirtySacred at 1:53 PM
Email ThisBlogThis!Share to TwitterShare to FacebookShare to Pinterest
Labels: #nawd, A is still for adjunct; written off, KCTCS, Kentucky, Kentucky community and technical college system, Louisville, my exile from teaching, The Louisville Teach-In, University of Louisville
Newer Post Older Post Home