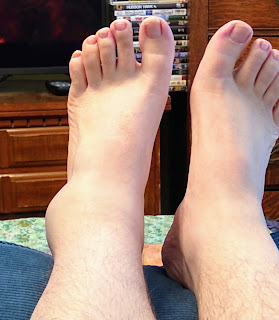 I can't complain.
It'd be easy to. But complaining might jinx it and if I'm being honest, a twisted ankle isn't the worst thing that can happen during the plague year.
And now with talk of "reopening the economy"... as if the economy has really closed... the only thing I seem to be able to focus on is what to carry forward.
I keep thinking of my maternal grandmother, Lonnabelle Dunn, and what she carried. She lived through the Great Depression. She saved lidded plastic containers -- the kind that cottage cheese, sour cream, and margarine were packaged in. She washed them and saved them "just in case." She grew up in Crystal Lake, Wisconsin.  She taught me to play Gin Rummy, which she enjoyed because her father, a deeply religious man of an temperance bent, wouldn't let her play any card games that used face cards since face cards were used in gambling.  She would save barely used sheets of paper towel.  She could, in turns, be pragmatic and then  pollyanna.  Her world had clearly defined roles and expectations and she spent her later years watching all of that unravel. It must have seemed unfair.
Some frugality was already set before all of this mess with COVID-19.  It's not that I'm especially good with money ... it tends to burn a hole in my pocket ... but I've been pretty good over the years at keeping reasonable, shelf stable supplies.  I've learned to be a decent cook. I'm fortunate to be married to someone who is an amazing cook. We're decent planners and not particularly scared of new things. I'm content to carry that forward, along with a renewed conviction that life is suffering and connections matter, and that people are still more important than profit.
The thing I don't want to carry forward is some expectation of normalcy. Normal is an unfortunate nostalgia. People infected with it simultaneously have a very specific, concrete notion of what it looks like but can't really seem to agree on what it means. We group together based on having similar pictures of normal in our minds.  We pass these cement abstractions on to out children, and within two generations normal becomes tradition, which is sacrosanct... until it isn't.
A year after the 1918 flu, the Rev. Francis E. Tourscher was concerned that people were starting to forget, which is why he recorded the stories of nurses in Philadelphia for preservation in the Records of the American Catholic Historical Society of Philadelphia . He wanted the facts on record from people who experienced the pandemic because memory has a way of giving way to nostalgia.
I both derive some comfort and am deeply horrified that our tendency to embrace nostalgia isn't tied to something as new to the world as technology. 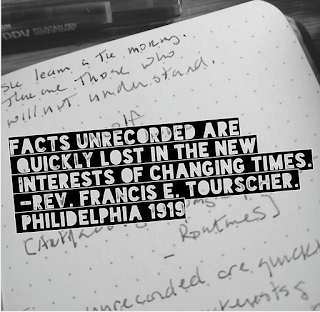 Normal -- that infective kind of nostalgia -- often ends up running contrary to fact. And in these, the days of Trumplandia, where facts are under erasure more than ever, normal is a nostalgia we can't afford if we're to carry anything forward that will keep us alive.  So I'm going to let my ankle heal. I will need it to carry things forward. Things that matter.
Posted by DirtySacred at 12:56 PM
Email ThisBlogThis!Share to TwitterShare to FacebookShare to Pinterest
Labels: #dirtysacred, #everythingswims, covid-19, Letter from Trumplandia, social distance diary

[re: lines on the day I remembered my father's birthday]

For years I drove out by the old house to see what the new occupants had done to wreck the place. The time I drove out and saw the buried wagon wheels at the end of the driveway, like some broken redneck gate straight out of HGTV and the western-chic issue of Better Homes and Gardens, I knew my father's imprint was worn off. Finally, indescribably, gone.

And even as I write this, I don't know that I ever made peace with that -- until now, as I come to terms with how I feel about being at my mom's, and how my own wounded vision has impacted not only how I feel about this place, but about my Losantiville as a whole.

Only now do I understand that I must see this place like any other place -- and that this vision must extend to all places. Even the ones I allow myself to be attached to.

Thanks for reading! If you like what I'm doing, please consider leaving a tip. It helps keep the lights on. Thanks again!
Posted by DirtySacred at 10:54 AM
Email ThisBlogThis!Share to TwitterShare to FacebookShare to Pinterest
Labels: #everythingswims, #wellwornboots, Cincinnati, Haibun, home, Kentucky, Losantiville, meditation, Ohio, re lines on the day I remembered by father's birthday, tanka, tao, travel, Word-Things, Zen
Location: Fruit Hill, Cincinnati, OH 45230, USA 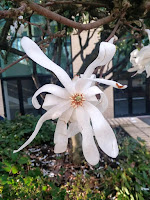