Be at war with your vices, at peace with your neighbors, and let every new year find you a better man. -- Benjamin Franklin

Always do sober what you said you’d do drunk. That will teach you to keep your mouth shut. -- Ernest Hemingway 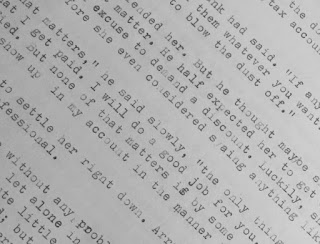 Last night over dinner with my father and mother-in-law, the topic of new years resolutions came up. I am, not uncharacteristically, close to the chest about those kinds of things. It's not that I don't want to share; it has more to do with my lagging cynicism about them. Most people make resolutions they have very little chance of fulfilling. This isn't because of a lack or absence of resoluteness, fortitude, or good intention.

Generally, people box themselves in when they make resolutions. My wife pointed out the other night when we were talking about this very same topic at home that a large part of why people tend to fail at resolutions is because they word them in a punitive way.

The last time I made any NYE resolutions and actually SPOKE them aloud on NYE, I believe I was three quarters of a case of beer and a bottle of cheap rye** into a night that I still, to this day, don't really remember. For all I know, I promised to quit drinking and join the Hari Krishna's.***

I am grateful to this day that social media didn't exist 20 years ago.


And while that annoying cynical voice keeps telling me that resolutions are ridiculous, that it's nothing more than setting myself up for an inevitable feeling of failure and dissolution at the end of 2017, the optimistic part of me that has been resurrected over the last few years**** reminds me that setting goals is a form of forward thinking. It helps to have a general direction you want to go before setting off on the road, and if that tired old cliche about life being a journey has any validity at all... which it probably does, or it wouldn't be a tired old cliche... then I need to set goals for 2017.

A couple of those things are in process. Thanks to my amazing wife, I received a punching bag and gloves for Christmas. Over the last year, I've had to come to terms again with the fact that I do, actually, in spite my best intentions, have a bit of a temper and a few anger issues that aren't all that easy to resolve. So, rather than turning all that anger internally -- which will hurt me -- or externally without focus -- which hurts other people, usually people I love -- I will direct it at a punching bag. I'll never be a boxer, but that doesn't mean I can't feed the pugilist in my soul.

I also decided to resurrect my old manual typewriter. It's a 1957 portable Olympia, which was Sears' market answer to the Smith Corona. It was a gift from my brother and now-ex-sister-in-law. I used it when I lived in New Orleans in a "reconditioned" crack house^. I hammered out two complete drafts of my master's thesis in graduate school. I've written more on that typewriter than I have ever shown the world. And while it will never replace this blog, or my various projects in the digital world, there is something about coming back to the machine that makes me feel good. And if feeling good is wrong for a resolution, I don't want to be right.

I'm also reaching an important mile marker in that I will turn 44 in February. I've considered every year since 27 dumb luck and every year after 33 an undeserved blessing. So here's mud in yer eye, 44.  In spite of myself and a short list of people with questionable taste, I'm still alive and kicking. Ninny- ninny-boo-boo.

2016 has been an up and down year for me. I finally and officially was divorced from higher education. I spent 6 months trying to find another gig, only to find one that, while the pay was decent, the hours took me away from all the things I was working to maintain. I lost friends. I pissed people off. I stepped back from my obligations to speak out and agitate. I hope to spend 2017 building bridges and repairing relationships, spending more time writing and creating and speaking truth to power in these, the waning days of Babylon.

I'd also like to take a dancing class. So there.

If you like what you're reading here, I have work for sale on my amazon author page:
www.amazon.com/author/mickparsons
Posted by DirtySacred at 9:00 AM
Email ThisBlogThis!Share to TwitterShare to FacebookShare to Pinterest
Labels: 2016, 2017, art, freedom, manhood, new year, new year resolution and other powerfully mixed cocktails, preparing, re-dedication, refocusing, resolutions, Resurrecting dead machines, Trump, typewriters, writing
Location: Louisville, KY, USA

Last season’s transgressions are forgiven.
For a moment, we are wide-eyed.
For a moment, we are in love with the scent of a well-oiled leather mitt.
For a moment we are eager to knock off old dirt
and silence everything
except the welcome canticles of beer and hotdog vendors.
For a moment we shut out the prognostications of cynical game announcers.
For a moment unbelievers pray the Yankees don’t buy another pennant
and the faithful prepare to have their faith justified
or risk persecution by the All-Star Break.
For a moment all our digital distractions disappear –
politicians and their polished shit soliloquys are shushed
and all the noble rivalries rise to the surface.
You judge your friends by whether they watch the Cubs or the White Sox
and if they know Tom Seaver’s number
and if they embrace the dream of seeing Pete Rose in Cooperstown.
For a moment
the day, the hour, the minute, and the weight of all the ages past
rest upon whether that first pitch and the sound of the ball hitting the bat.


If you like what you're reading here, I have work for sale on my amazon author page:
www.amazon.com/author/mickparsons
You can also leave a tip if you'd like. Thanks for reading!

Don't get no respect: back to school, wobbly-style

I'm heading back to campus today to line up the last bit of what I need to do in order to teach on Thursday. Between the usual decline in course offerings and my separation from the local alternative dining and concert guide*, this winter, like most every, will be a tight one. I'm always on the look for more work, and I'm going to be diving into some projects and working on my poetry and fiction. I'm uncharacteristically prepared for the semester to begin, actually... primarily because I'm simplifying my teaching methods and focusing on what's really important in a writing class.

People ask me all the time what I teach. When they're kind, or when they know I write poetry, they immediately ask if I teach creative writing**. I have to, for the sake of conversation, clarify that I teach academic writing***, tossing in some scholarly research methods and some interesting stories and little known history. I've been using Labor History the last few years as the subject matter for my Intermediate classes; I think it's important try and highlight little known facts of history that get overlooked in the narrative of manifest destiny.

This semester, I'm trying something a bit different because what I find in teaching labor history is that many of my students are incredibly disconnected from the events I wanted to talk about and the stories I wanted to tell.  I also found that in my attempts to ensure I was doing my job that I lost some the fundamental elements of my teaching style that made it fun and interesting.

One of the things I'm doing is simply changing research topics, for a while. My classes are going to be examining some events from local history: the 1855 Bloody Monday Election Riots, The 1937 Ohio River Flood, and river stories and myths. We're going to talk about how these narratives -- and the narratives of more current events -- impact ourselves as individuals, as a city, and as a larger culture.

So basically -- I'm going to tell stories, read and talk about essay drafts, and focus the important stuff.

And, you know, take attendance. Can't escape the all the tedium.

But I am grateful to have some kind of work
_________________________
*The latest article of important was about how Louisvillians in their 20's move to Germantown, where the rent is cheap. You know... like they have for the past 20 years.
**I have written before about how the term "creative writing" annoys me because it implies that some kinds of writing isn't creative or part of a creative process.
*** Academic writing, apparently, has no creative process. Don't get me started.


If you like what you read, please consider helping support the author. Thanks for reading!