Save me from philanthropy: cultural preservationists versus the martyrs 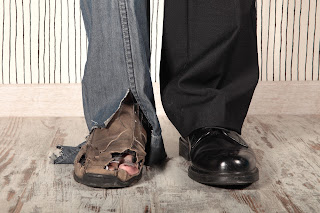 When I was growing up, I was told all I needed to succeed was a pair of bootstraps and the sheer determination to pull my feet up over and behind my shoulders.

And although no one said it, the fact has always been understood that success in America means being able to face the system that's screwing you rather than taking it face down in a stinky foam pillow.

We put so much store on success -- and by success I mean not having the misfortune of being considered a blight or inconvenience to someone else.

Working in homeless outreach, I've heard it all. A lot of people -- so many that it sometimes causes me to despair when I ponder the future of the human race -- view the homeless as a blight, like aggressive red ants or the ever-increasing clouds of Africanized bees. People on my neighborhood association page regularly put the homeless in the same category as car thieves and drug dealers. Stigmatized as violent criminals, they're treated like a scourge that needs to be gotten rid of.

It doesn't do any good to explain to these preservers of a homogeneous and non-existing (not to mention never-existing) culture who say these things that homelessness is not moral judgement; people have been treating homelessness, poverty, as well as mental and physical disabilities, as a moral judgement for centuries.  The rampant spread of literacy and access to the most recent research in economics, mental illness, addiction, and disease doesn't seem to have any impact on these self-appointed pillars of culture and society.

Then there are the martyrs. They see the homeless and equate them with the sad-eyed animals they see in PETA commercials. It's not that they're any less repulsed. They see a problem that needs to be fixed. They see something broken that needs to be healed. The actual story, the actual reasons, the actual complex details behind someone's homelessness, don't really matter. The complex ball of issues -- economic, psychological, physiological -- don't matter. They read articles about how other cities here and abroad take the homeless and put them in the empty houses. They see this as a solution. Or they want to build more homeless shelters -- having never seen the inside of one themselves.They see themselves as the saving crusaders of the homeless. All they need is a job. All they need is a place to live. All they need is to see their doctor, or their shrink.

The world is full of well-intended and soft-hearted little fascists that would save the homeless-- whether they want to be saved or not-- just to save themselves from the awful inconvenience of having to be reminded, daily, of their existence.

Outreach only works when you embrace the belief that you can't save anyone. If, in the process of serving them, they decide to take it upon themselves to pick themselves up, you are there to lend a hand and help. They are not broken toys that need a little glue and dusty shelf to sit on.

Compassion is a PR word here in Louisville... at least among the elected leaders. The drive is economic and the homeless are treated with derision and apathy as people seek to "solve" the problem of homelessness without increasing funding or improving access to the institutions that over-burdened and underfunded while other organizations (one in particular) get the lion's share of public money to lock the homeless out of the one place most "regular" citizens say they belong -- in a shelter -- while managing to exploit them for profit in the name of "saving them."

At least there are good people here who counter-balance all this cynicism. I meet them all the time, work with them on outreach, hear about them from the folks on the street when I serve. I know they're out there and it gives me hope that maybe, just maybe, we can find a way to do right by our brothers and sisters without the burden of ego and the paternal tendency to believe they can't speak for themselves.


If you like what you're reading here, check out my work for sale on Amazon: www.amazon.com/author/mickparsons You can also throw a little in the tip jar:
Posted by DirtySacred at 9:00 AM
Email ThisBlogThis!Share to TwitterShare to FacebookShare to Pinterest
Labels: cultural preservationsits, Foucault, homelessness, Kentucky, Louisville, martyrs, outreach, Save me from phlianthropy
Older Posts Home
Subscribe to: Posts (Atom)