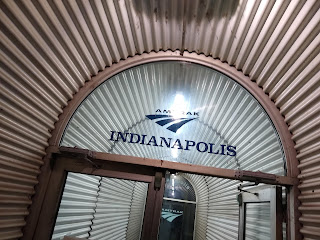 The bus shot down I-65 out of Indy, headed to Louisville, trying to make up for being an hour and half late out of the gate. The old grey dog was loaded for bear. Every curve and bump seemed to tear at the fabric of the thing, like it was held together by duct tape and chewing gum.  The guy next to me was a nervous little germaphobe  in a slim fit flower print shirt who moaned audibly at every rough jump and turn. The woman in front of me was a bundle of nerves who found out about a half hour from Louisville that she wasn't on the bus to Cincinnati.

I chose to give myself over to sleep instead of worry. That was the only thing I had control over. I don't know that I ever felt more free than that moment.

Eastward-ish: Dennis the Menace and The L.A. Bus Station


It takes a thousand voices to tell a single story. - Native American Proverb

It was somewhere around the time that Dennis finished telling the story about how he and his dad had to help a stumbling drunk then President Jimmy Carter to his limousine -- much to the annoyance of the Secret Service suits who were, at the moment, looking at a long semi-retirement in Georgia having to babysit an ex-president -- when it was announced that our bus was boarding.

I was sitting on the floor in line at Door 14 in the Los Angeles Central Bus Depot, waiting. There is an established etiquette in most bus depots that says you can leave your bags and hold your place in line; naturally, this unofficial rule runs contrary to the official rules as set down by Greyhound Bus Lines, which state that no bags should be left unattended. There is also another common courtesy among most bus travelers -- bag watching. Which is to say that if you're holding your place in line at the gate (This does NOT apply to the ticket counter... ever.) and if you need to run to the restroom without losing your place in line, you can ask someone to watch over your shit while you're taking one. As the person watching, it's your responsibility -- if you chose to accept it, Mr. Phelps -- to move the other person's stuff forward if, for any reason, the line should move. It is NOT your responsibility to load someone else's crap on the bus, or to make sure it gets put under the bus.

Naturally, Greyhound Bus Lines has a rule EXPRESSLY FORBIDDING you from watching any bag that isn't yours or belonging to anyone you don't know well enough to have either changed their diaper or helped them through the trauma of a body cavity search.

I watched Dennis's stuff when he went off for a smoke, and when he got back, he hobbled and sort of fell -- he later told me he was suffering from a sciatic nerve -- next to me on the floor, telling me about he and his dad and Jimmy Carter. He also took care to point out that his mother was already in the limo drinking with then Presidential Family Prize, Billy.

Dennis and I left San Francisco on the same bus, changed buses in Sacramento, and were now waiting for the bus from Los Angeles to Dallas., where he would change buses again and head south for Miami, Florida. I was getting off the bus in Phoenix, where I hoped to visit friends and see some old stomping grounds.

The availability of a friendly couch or piece of floor was also a determining factor. My stay in San Francisco, while cheaper than it certainly could have been -- the city has a 15.5% surtax on hotel rooms -- still depleted my travel fund to the point that I had to either go someplace with friends, or go someplace and hope there was an open bed at the men's shelter.  I had been promising friends in the 480/602 that I would stop through my Westward Jaunt. My original plan, prior to being waylaid in St. Louis and ending up in Nashville, was to circle south and visit The Valley of the Sun while it was still almost kinda sorta comfortable. But the timing was good, anyway... being low on funds and knowing I'd at least have a place to crash -- not to mention being able to see friends I hadn't seen since the eventually-to-be-ex and I left the desert for the four seasoned tundra of Northwest Illinois -- was all the incentive I needed.

And of course, coming from the West Coast that meant going through L.A.

Now, as much as I've said I don't have much interest in seeing L.A., I have to admit I kind of wish I could have. The problem, as far as I can tell, is that I'm not quite sure how to wrap my head around a place like Los Angeles. Most other cities -- even the horrible gray ones like Norfolk, Virginia --  have a sort of personality. Sure, most cities are diverse, and have all kinds of stuff; but even New York -- which is by far one of the more diverse conglomerates of buildings, neon, history, and twisted metal that I have ever seen -- still has a sense of itself. Even Cincinnati, which has very little sense about anything, especially among the people who are typically elected by Indian Hill residents to keep the keys and turn the lights on and off, still has a unique personality. L.A., it has always seemed to me, is more of a Choose Your Own Adventure City. Is it the punk/rock/goth/music scene that's the backdrop of such shows like LA Ink? Is it Bukowski's North Hollywood? Is it all glam and slam bam thank you ma'am like it looks on the Oscars? Is it Watts? South Central? Compton? Seems to me like whatever you want out of the City of Angels you can get.

The bus station in L.A., though... that was a world unto itself. The first thing I noticed -- besides throng of people and the near impossibility of getting around without having to almost run people over -- was an underlying and (as of yet) undetermined smell. I am (sadly) familiar with smells fine and foul, from expensive bourbon to 3 day old cooked puke and piss in the gutters of Bourbon Street in New Orleans. The odor of the L.A. station wasn't sweat, or body odor, or garbage. It wasn't gasoline. It wasn't piss or old mop water.

Luckily, the bus we were on from Sacramento was about an hour behind schedule. That cut the 2 1/2 hour layover time down, at least.

Dennis was worried that the bus would be too full. He had managed to avoid having anyone sitting next to him by essentially setting up camp. He put his bag in the seat next to him and didn't move it. Lucky for him, neither of the buses was so full that he would be compelled to move it by the driver. I didn't fair that lucky...though the bus leaving Sacramento had been, at least, a modern bus with electric outlets and a spotty WiFi connection. I didn't expect any of the West Coast buses to NOT be full. And as much as I would like to have Dennis's tenacity, I still adhere to some simple rules of bus travel... that include watching somebody's bags in line when they go off to the bathroom for a quickie with a bus station hooker.

Sorry. Lady of the Evening. Lady Thanks to Duck Tape. Lot Lizard. Depot Deepthroater. Hand Job Sanitizer. Whatever. I'd hate to get someone's job title wrong. What do you call it when someone pays you for sex in a bus station bathroom?

Being a Republican.
And NO, I don't really care. I just think it might be better to have this shit out in the open. Set up Hooker and Coffee Kiosks. You can have chaise-lounge and a privacy curtain, order it all up like at Starbucks:

The thing about Dennis's Carter story, which ended, improbably enough, with a statement that he liked Carter just fine until he gave away the Panama Canal ... after which he never forgave him ... was that while I almost certainly didn't believe him -- Ok, I was almost certain that I was certain I didn't believe him -- it didn't much matter to me whether I believed him or not. I liked Dennis. He looked rough. Looked, as a matter of fact, like he'd spent some time out, and was running with his tail between his legs. And as we talked, I discovered that this was probably closer to the truth. Before he got on the bus in San Fran, a suspiciously plain clothed cop type person handed him a bus ticket to Miami and $40 -- $10 a day for every day he would be on the bus. I found out later, among Dennis's story telling about being a master mechanic, carpenter, and about how he had to leave the West Coast because there was no work for him, that he had come out San Fran to see his wife, who is apparently brilliant, with multiple university degrees, and is absolutely gorgeous to boot.

"She says 'Dennis, you're a distraction. I can't work with you here.'"

Now, I know what you're thinking. You're thinking the same thing I did. You're thinking "If you are married, there has to be a reason she moved to the other side of the fucking continent to get away from you." He was a small guy, though, a bit older... older than his age, since he told me he was born in 1957 but he moved like a much older man... and didn't look like he could hurt anybody. His big red suitcase with the duck tape handle weighed more than he did. He told me it was full of tools.

It was heavy enough to be full of his wife.

The thing I liked about Dennis, though, other than his stories, was that he was constantly excited about the landscape outside the bus windows. He'd never been across country by bus, he said, he'd flown out before but couldn't afford to fly back. (I don't think he realized I saw where his ticket came from. I didn't tell him.) But he was always calling over to me, whether I had someone sitting next to me or not-- I had a window seat on one side and he on the other -- about something he saw out of his window. At one point he was on the phone with someone who told him the highway we were on was directly over the San Andreas Fault.

And to be honest, I thought that was actually kind of cool.

[Thanks for reading. And remember: if you like what you're reading: