My truck has been at the garage for a few weeks now.  I had it towed to a place nearby -- not my first choice of mechanics, but the place I like to take the truck was too busy to look at it soon, and I needed it soon -- because one of three things is wrong with it. If it's the more costly of the three things and it needs a new fuel pump, taking it somewhere with a lift seemed like a good idea. Now, I'm not a mechanic. I know enough about cars to be able to figure out what the problem most likely is, and I can do simple maintenance -- plugs, tires, oil, battery. But it's been a few weeks and one of the reasons I sent it to where I did was because I wanted it looked at quickly.

Well, my initial calls there were not promising. The voice on the other end of the phone told me they needed to order another diagnostic scanner. The truck is a 1995 Dodge Ram. That's not old, as far as I'm concerned. I mean, it has power windows and power locks. One of th e things I like about it is that the engine is sufficiently more engine than computer parts, so I understand how it works a little better. I also like that it's a big truck -- big back when they made vehicles to be repaired and kept, not tossed away in a few years.

I also like that it has a metal bumper. They don't use metal in bumpers much anymore, even in pick-up trucks. Lots of plastic and foamy fill.

Now, the truck had been sitting for about a month and half. It stopped turning over shortly after the first of the year. Since I started out 2017 self-employed and we live on a bus line, getting it fixed got bumped down on the list in preference to other things. But I decided to start substitute teaching in the public school system here, just a few days a week, to help bridge the gap between now and summer and while I built up my freelance client base.

Well, I ended up starting to sub before my truck was fixed. This is an issue as the county is a big one and getting to most of them on public transit is complicated at best. It's hard to accept positions when I can't just pick up and go when they call -- and they have a tendency to call at the last minute, like an hour into the day they're call me about. And yes, I can pick through some of the sub offerings on the website, but I'm more or less limited by geography. I've been trying to stick to the schools in my neighborhood or on a reasonable bus ride. It's not easy. 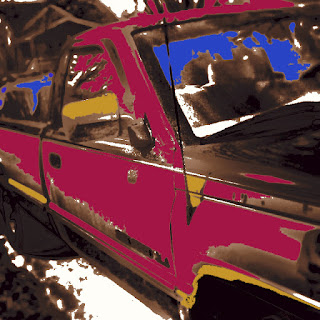 Well, on Sunday after Amanda and I  helped with homeless outreach, I decided to swing by and get a few things out of my truck. When we got to it, the cab was unlocked the middle console had been rifled through, and my papers were strewn everywhere. I had a tarp folded up under the seat that was pulled out. The truck had been rifled through, probably because someone at the garage left it unlocked.

Now, because it's an older truck, it's also got an older radio. It still has the factory radio, as a matter
fact. And, what's worse for any would be opportunist thief, it plays CASSETTES.* My socket wrench set was missing. It's not especially valuable, money-wise, but still.

Amanda thought I should have called the cops, but cops in Division 4 are useless unless it involves a drug bust** or there's a dead body, or they're just bored  and out to profile people because they look suspicious.

It being Sunday evening, there was no one there. And of course, the phone doesn't have an answering machine. When I talked to the manager on Monday, he told me his assistant manager quit while he, the manager, was on vacation. The scanner had not been ordered.

So, I'm still waiting. It doesn't change the fact that substitute teaching is an even bigger pain in the ass because I either take the metro or I inconvenience my wife. And, then there's my absent socket set. I'm not fool enough to think the garage will take any responsibility, and I know they are not technically legally liable.

But that doesn't change the fact that I'd just love to run into that jerk at the bar. I was so pissed that night we went for drinks during the UK/UNC game and I cheered for UNC just to maybe get the chance to hit somebody. As we were sitting at the bar, surrounded by rabid UK fans***, I told Amanda that I wanted yell out that I really thought Christian Laettner was nice guy.

"No," she said. "Stand up and say Christian Laettner was your lover."

I didn't. But it's nice to know that my wife understands me.

If you like what you're reading here, I have work for sale on my amazon author page:
www.amazon.com/author/mickparsons
Posted by DirtySacred at 9:36 AM
Email ThisBlogThis!Share to TwitterShare to FacebookShare to Pinterest
Labels: Letters from Trumplandia 7, Louisville Metro Police Department, mechanics, police, tread bare and fancy free, truck
Location: Louisville, KY, USA
Older Posts Home
Subscribe to: Posts (Atom)