Snowed in along the dirty, sacred river: #zombiesnopocalypse2016/Marchof the politicos

Politics: A strife of interests masquerading as a contest of principles. The conduct of public affairs for private advantage. -Ambrose Bierce


Genius is an African who dreams up snow. - Vladimir Nabokov

The truth is, I don't mind being snowed in as long as I have a few necessaries at hand:

And now that #zombiesnopocalypse2016 is upon us in full, my bearish tendencies to hibernate with my supplies kicks in.

Winter in the Lower Ohio River Valley is a contest between those things that force me outside of the house and my body's hatred of the cold -- as well as everyone else's general inability to drive in inclement weather.

When I lived further north, in the tundra of northwest Illinois* I felt much safer going outside during snow events because people were far more pragmatic. There was none of the running after bread, toilet paper, and milk when reports of another snow dump were announced. People prepared calmly, deliberately, and still managed to get out for church, the coffee shop, or to have a few drinks at the bar. The only thing missing were the warm weather tourists making their way from Chicago to Galena to visit artisan shops and a house Ulysses S. Grant used to live in. **   Locals only. Very quiet. And of those, only the ones who really know how to drive go out. Sometimes, that just means the workers with the street and county highway departments.

Now that I'm back home in the land carved out by water, I battle the cold getting into by bones and staying there (whether I'm indoors or not), those obligations that drive me out into the weather, and people's general inability to handle driving in snow and ice. I'm less nervous about the general conditions than I am the lack of someone else's insurance coverage. Generally, I stick to my natural inclinations whenever possible. I'm safely wrapped away in the bunker down here in the south end of Louisville with all of the above mentioned supplies, Amanda, our dog Gypsi and Wasabi the Cat.

It's important to take care and appreciate the little things. My employment outlook of late has not been great. I'm putting together some freelance work and I'm teaching two days a week. This leaves me plenty of time for other things, but sometimes other things don't pay the power company. I'm looking for opportunities and remain optimistic, though. There's no reliable gravy train in this gig economy -- this part-time worker's paradise*** that President Obama and the Democratic Party count as an economic recovery. Getting by means living by piece work. I don't mind it so much, but it seems selfish to have to have three jobs when there are people who don't have one.

But, that's the capitalist system for you. Ensuring that you work harder for less so that the exceptionally rich don't have to work at all -- leaving them time to take care all that tedious domestic governing and foreign policy muckety muck.^

It's important to take care and appreciate the little things. I have shelter, and a woman who loves me. I'm not starving, and I do get to indulge in some creature comforts. Happy is a surprisingly simply state of being.

2. March of the Politicos

Life never ceases to be strange.  But I suppose if I were the sort of person who could keep my elephant mouth^^ shut, these kinds of things wouldn't happen.

The first time I can recall my tendency to fill empty space with the sound of my voice was during my undergraduate years at Morehead State University. One of the more radical faculty members of the English Department^^^ was trying to organize a LGBT organization for students, faculty, and staff. This was during the mid-90's before the alphabet soup was truly a part of the cultural language.  The all-inclusive buzz term was "alternative lifestyle."+ Patty was looking for supportive people across the campus to come to the first meeting. She asked me to come out and show my support. So I did. There was maybe 30 people in attendance. Looking around, I saw that I was the only non-queer in attendance. Patty opened up the meeting, but no one would talk. This was Eastern Kentucky, and even though there was a large community of gay, lesbian, and bi-sexual folks there, it was still not safe to be TOO out. No one would talk. No one offered ideas. It was very quiet and very awkward.

So I spoke. I don't remember what I said, except that I qualified my position as someone supportive of everyone's right to be happy and be who they are without judgement. I can get a little fire-brand when I get warmed up -- I was probably supposed to be a preacher -- and by the time the meeting was over we decided on an initial course of action and the next social activity (a movie night).

Needless to say, it was one more nail in a coffin of a marriage.

That sort of thing happens to me on a not-regular basis. I open my big mouth and end up being responsible for something.

Part of the burden of being a vocal (some might say articulate) and opinionated (read: stubborn) person is that sometimes you have to step up to the line you mark in the sand. It's not enough to talk the talk. You have to walk the walk, too.  And because one of the many things I love going off about is politics++, people sometimes make assumptions about me.

What confounds me, though, is how, when I am

I have been asked to run for a public office not ONCE, but TWICE.

The first time happened when my local metro councilman, Dan Johnson, was up for re-election. He's been a metro councilman for District 21 for 30 years, and is generally thought of as a nice, but not terribly bright guy. He gets elected  because he's a registered democrat in a traditionally democratic part of town in a generally democratic leaning city. I won't go through all of the issues with Dan here, but you get the impression after a while that he makes most of his decisions driving home or between games of Texas Hold'em on his smart phone. I was approached over social media by some people in the neighborhood, asking me to run. I turned them down because they were very clearly mistaken. They assumed that because I'm in my early 40's and openly critical of an incumbent democrat that I must be a libertarian. I'm not. 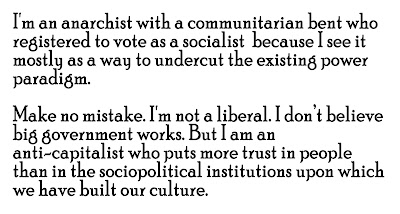 So, when a local mover and shaker who I know casually -- and who I like, really -- wanted a meeting with me to talk about ways to take back the Democratic Party, I was naturally curious. I broke with the Democratic Party after it was clear to me that they had broken with me and with everyone else it claims to be "there" for. In most every way, they are WORSE than the Republican Party.

He asked me to file and run to be a legislative chair for the Kentucky Democratic Party -- the very party whose malfeasance and ineptitude handed the governor's mansion to a tin pot little fascist who, contrary to his party affiliation, really isn't a Republican. He's a far-right neoliberal. He's the newest face in the rise of the American nuevo-nazi party. And I don't feel like I'm going overboard with that description. Republicans, at the end of the day, tend to be pragmatic. Yes, they're ideological... but to a point. Bevin wants to push austerity measures on Kentucky because he has a politician's taste for power and a zealot's belief that God is on his side -- regardless whether the deity endorses him or not.

This mover and shaker is trying to fix the Democratic Party from the inside, and I wish him well. And I won't lie -- I was tempted. He was ok when I told him I'm a Wob. He didn't even blink when I announced my anti-capitalist stance.

But he was stymied when I told him I'm not a registered Democrat and that I was unwilling to change my affiliation for the sake of expediency and the hope of fixing a broken political party.

I wished him well and we parted on good terms. I told him I'd still think about it, but I suspect he's already made other plans.
______________________________________
*Mount Carroll, IL, I love you. Hopefully I'll get up that way when the spring thaw hits.
** He was born in Pt. Pleasant, OH, near where I grew up. Not to be confused with Point Pleasant, WV, home of The Mothman Festival.
*** The Democratic Party is far more dangerous than the Republican Party. You can see the GOP coming. They don't hide their contempt for working people -- which honestly is why I think so many working and working poor people vote Republican in spite of the fact that Republican policies harm working people.  At least with the GOP, you know you have no standing. The Democratic Party has the same Neoliberal agenda as the GOP. The difference is, they'll try and be your friend before they pick your pocket.
^ Plutocracy
^^ One my father's favorite tirades: "Your elephant mouth is going/has gotten/just got your chipmunk ass in trouble!" He was a master of the mixed-up metaphor. But the tone carried his message quite well.
^^^ Patty didn't get tenure and ended up going to Bowling Green State University in Ohio.
+It was an incredibly problematic term that lended too much authority to the narrative that sexuality is a choice. Patty acknowledged this to me once... but she saw it as a transitional term -- a way to warm misinformed cis-normative (to use the current term for heterosexual) folks into a rational discussion. And since she was/is a lesbian and a long time activist, I ceded to her view on the matter.
++ Politics is the best blood-sport going. There are no roughing the passer rules, no boundaries besides the dark imagination, and the clearest image of who people are when they are devoid of the rules of etiquette.
If you like what you read, please consider helping support the author. Thanks for reading!