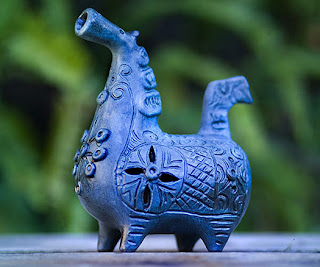 There's nothing worse than being put in a position where you have to explain yourself to someone who may not be worth the time, the effort, or the energy expenditure. I make it a habit to NOT explain myself. I think of self-explanations as the same as having to tell someone why a joke is funny. If you have tell someone why the horse being blue in August is funny, then you've wasted your time.

When I left JCTC after concluding the first half of my HR Paperwork Blitzkrieg, I drove back down Third Street to the University of Louisville. After finding some creative parking, I made my way onto campus and into the Bingham Humanities Building.

The building is built in the shape a rectangle. This would lead one to believe that the building is easy to navigate.  Once inside, however, the combination of knock off Frank Lloyd Wright minimalism, asynchronous office numbers, and Dantesque signage is clearly designed to confuse the first time sucker rather than inculcate him with a sense of warmth similar to the last stage of hypothermia.

After stepping off the elevator and walking far longer than I thought thought I should have needed to down off season academic hallways, I found the right office. But Linda, the person I was supposed to talk to, wasn't there. Instead, I was greeted with a Post-It note informing me that she was in some room in the basement.

Fuck me, there's a basement to this place? Is that where they imprison failing graduate students and abandoned developmental writing programs?

My intention was to try and find Linda in the basement. Except that I couldn't find the elevator again. It was as if the wall had simply swallowed it up, along with any hint of a stairwell.

Salvation came eventually in the person of Linda, who said she was glad she hadn't missed me.

Is there really an exit, I asked, or is it just an existential concept?

Linda blinked the way a dog blinks after being told to stop chewing on a slipper. I have been told before that I should not tell jokes because my delivery stinks. I reject this criticism, however, based on the fact that humor is as much about context as tone. And within the context of being new to the university, being new to Louisville, as a matter of fact -- something that was very much known to my new soon-to-be bosses at U of L -- and being a last minute hire to teach a class, I figured that I'd have a shot at a chuckle. Sartre references almost always work, and secretaries are not immune to the malaise of academic idea entendre.

I have the utmost respect for secretaries and janitors because they run the world. The people who file your W-2 and the people who clean public bathrooms are more important to the overall running of the world than any administrator, politician, or cop. And I had no intention of confusing or upsetting Linda. I was merely trying to relax, be friendly.

We rolled past the awkward beginning and into the paperwork. When we got to the I-9 I produced both my Ohio Driver's License and my passport card -- the latter of which should have been enough (as per Column A.)

I think I need your social security card.

I don't carry it. The passport usually works.

I'm pretty sure I need your social security card.

I don't carry it. It's ragged. It's my original social security card. You're not allowed to laminate it. It's as thin as toilet paper.

She xeorxed a copy of both my driver's license and my passport, but would not let go of the social security card.

Fine, I said. I'll bring it with me to orientation.

On my way to U of L, I had decided to tell them about the criminal background check snafu at JCTC.  I considered it a form of professional courtesy. Though my initial face to face contact with Linda had given me some reservations about following through, I ignored that instinct and went on ahead with my well-intended disclosure. After all, it was funny. Right?

I explained it again.

I asked if I needed to write a note to HR or something, just to keep on file.

She blinked. Then she sat down at her computer as if she intended to write an email to HR herself. She offered to let me write an email myself. But, she pointed out, the HR person was gone for the day (after 2pm on a Friday) and would not see it until Monday anyway.

I told her I'd send it over the weekend or some other time. I had her lead me out to the elevator --which, magically appeared not 20 steps from her office door.

Once I escaped, I made for a nice well lit place with cold beer.