Letter from Trumplandia 3: art as memory/ memory as subversion

When you are forced by circumstance to focus on survival, it can be difficult to remember that it's as important to nourish your soul as it is to feed your stomach.  Arts-based organizations are poised for a fight that they may very well lose simply because the numbers are against them. Grant money is already being squeezed and if the past budgetary actions of the Republican Party are any indication, the arts will have to find other revenue streams in order to survive.

The squeeze has already been felt here in Kentucky, where our tin pot little fascista Governor Matt Bevin cut money to the Kentucky Arts Council (and everything else) in his first budget. Granted, he did not, as was widely feared, eliminate funding for the KAC entirely... for which they puckered up and kissed his New England ass. There will most likely be another budget cut next year, too. Bevin, like every fascista before him, refers to the arts and things like it* as "nonessential services."

And most likely, when he does, the folks still remaining at the KAC will again express gratitude for Herr Governor's

As Trump's overblown inauguration began to loom as an inevitable reality, The Hill reported that undisclosed sources within his transition team said some of his budget cuts included privatizing NPR and eliminating funding for the National Endowment for the Arts .Naturally, that would be catastrophic for many arts organizations, including educational arts organizations.

Though really, part of me suspects that the announcement was leaked, not so much as a statement of
intention but as a misdirection. 45 has time and time again proven to be a master at misdirection. His entire professional life up to and including his 2016 POTUS election win has been nothing more than an extended game of 3 Card Monte.

Without the arts, there is no such thing as civilization. I've said before that society rests not on laws, but on the arts and simple etiquette. In these, the rising days of the new wave, this is especially true. Art is more than entertainment. The arts are our collective memory. And it's been nice to have a government that acknowledges -- albeit grudgingly and not without malice** -- the arts.


It's been nice. But we need to start deciding what to do if it ends.

Over the weekend I listened to David Marcus -- Sr. Contributor to The Federalist and Artistic Director of Blue Box World in Brooklyn -- on NPR's Saturday morning journal show talk about why the death of the NEA would be good for art in America.

His essential argument is that the arts existed before government and don't really need the government, and that the arts need to be competitive in a free market. I'll deconstruct the problem of commodifying art and how free markets are a myth in another post.***

Part of what feeds his argument and gives it validity is the strain of elitism in the arts and how arts organizations go about doing what they do. There was a time when you preserved the arts by opening a gallery, or a theater, or creating a non-profit organization dedicated to preserving a particular art form. These organizations operate on membership dues, donations, patronage, partnerships, and grant money. In the absence of grant money, non-profits have a really difficult time sustaining themselves -- or, if they don't have trouble sustaining, no one knows they exist, their membership stagnates, and eventually the organization disappears because most of the membership dies. 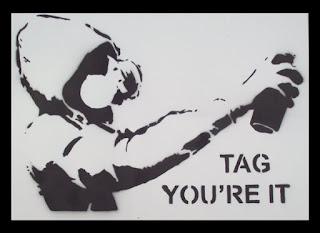 In order to survive, artists and arts organizations have to reinvent themselves, not to try and break into or maintain a market, but to remain the living memory of a civilization at risk. There's more at stake than ticket sales. Democracy is at stake. In addition to the obligation to speak out against the tyrannical new wave, artists are obliged to be the memory of what is happening. We record. We remember. We are the storytellers, the bards, the players. The job is ours, because if we leave it to the historians, the narrative will be an extension of the same manifest destiny bullshit they still teach kids.

In other words, start thinking like a tagger and not the cops who arrest taggers.


If you like what you're reading here, I have work for sale on my amazon author page:
www.amazon.com/author/mickparsons