A Baboon In New York, Part 2.1: A Baboon on Wall Street

“Let Wall Street have a nightmare and the whole country has to help get them back in bed again.” -Will Rogers

"The point is ladies and gentlemen that greed, for lack of a better word, is good." -Gordon Gekko

There's a spot, when you're at the Staten Island Ferry Station, where you can see the Statue of Liberty. It's at a distance, in relief against the western sky and the choppy waves of the Hudson River. I don't know if I'll actually take the ferry out to see it and Ellis Island up close; it's one of Those Things That Tourists Do. I have no interest in being a tourist and I'm entirely too cynical about the condition of our country to get all touchy-feely about it.

But I'm getting ahead of myself here.

When Susan asked me what I wanted to see, I told her one of the things I wanted to see was Zuccotti Park, and that I wanted to go Wall Street, and maybe Time Square. Zuccotti Park was and is the location for the Occupy Wall Street Movement that has spread across the country. When it started in October, I was itchy to be here... but life intervened and I wasn't able to get here. Luckily, my very hospitable friend, Susan, was here to give me a sense of what was really going on -- because I sure as shit wasn't getting it in any of the media coverage.

The first thing I learned... something I don't remember being much discussed... is that the Zuccotti Park, in addition to being close to Wall Street, is located in the shadow of New World Trade Center.

The memorial for the 3000 people who died in the two towers is in the process of being constructed BEHIND two new towers. The construction of One World Trade Center (1 WTC) and another tower were delayed because of disagreements about design, planning, etc.

Sitting in Zuccotti Park, aka Liberty Plaza Park, staring up at the rising skyscraper, it struck me yet again.

3000 people die for no good reason, and the absolute best that we can come up with, other than a war in Iraq that made no sense -- in which the official number of American deaths is estimated to be 33,186 (antiwar.com)-- is a symbol that the business of America is and will always be BUSINESS.

(The actual death toll is probably higher. And if you take into account allies and civilian "collateral damage, the number is staggering.)
Since the encampment was destroyed by the city under the pretense of "cleaning it", most of the occupiers are finding ways to wait out the winter. Another interesting tidbit that was left out nearly all the ridiculously ineffective media coverage of the Occupy Wall Street Encampment -- technically, Zuccotti Park is joint Public/Private property.

In order to build a really tall building to house a Brooks Brothers store and a couple thousand anonymous offices no one gives a shit about, Brookfield Office Properties entered into an agreement with the city to make the Park into Public Space. And because it's Public/Private Property, unlike the other parks in New York City, it's open 24 hours. Thus, Liberty Plaza Park -- a place that was considered part of a 9/11 memorial --  was renamed for Brookfield Chairman John Zuccotti.

I guess you know you've arrived and conquered New York when you can put your name on stuff. And whoever has the most stuff wins. 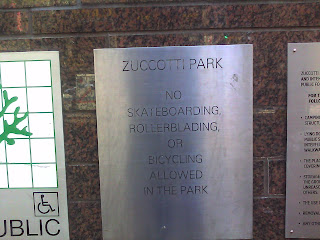 Then again... there's always a bigger hair piece. Sorry Johnny boy.
There's never a Magic Marker around when you need one...
... no paint filled balloons, either.
My initial impressions of Lower Manhattan were claustrophobic. Especially Wall Street. The labyrinth of skyscrapers and alley width streets block out the sun. The wheezing mechanical money heart of America thumps and bumps in the dark, hidden by long shadows. Light and air are expelled by the very nature of the place -- which probably explains why so many stupid things happen there.
It's common knowledge that denying your brain oxygen kills you brain.
It's common knowledge that an absence of sunlight causes sadness.
It's not commonly known, however, that over time, the absence of air and light
will strangle your soul.
And then, they name a park after you.
Being in Lower Manhattan on Ash Wednesday was an interesting experience. I'm not Catholic, and except for the fact that my name is probably still on a list buried in an ancient file cabinet at the Bethel Church of Christ in Bethel, Ohio, I'm not listed anywhere as a Christian -- Catholic, Protestant, or otherwise.
I've made up my own label, primarily for reductive and Facebook related reasons: Zen Transcendentalism. All it means, Dear Readers, is that I believe we are more than what we are. I also believe that experience is its own sacred text -- more sacred than any text that's been handed down and re-translated through cultures and generations.
There's a great quote by Lenny Bruce that goes something like this:
"When you live in New York, even if you're Catholic, you're Jewish."
With all respect to Lenny Bruce, this may not necessarily be the case in Lower Manhattan on the first day of Lent. I saw so many men in tailored business suits and women wearing business couture with ash crosses on their foreheads that it seemed almost like part of the uniform.

Then again, it is derived from the ancient Jewish tradition of placing ashes on one's forehead to indicate mourning. So maybe Lenny Bruce had a point, after all.
The thing is, when you consider the mess that the Financial sector has made of this country -- spare me, please, from that tired adage about the business of America being the systematic rape and pillage of people's life savings or that other one about boot straps and S&M masks -- maybe they ought to be asking someone for forgiveness.
I mean, it can't hurt. Right?
(Cont. in Part 2.2)
[If you like what you read here, you can help by:
THANKS FOR READING AND FOR YOUR SUPPORT!!]

"You can be a week beyond the need for a good bath, your clothes can be rags, and you could look like an extra from a zombie movie. But if you're wearing clean socks, you just feel like better." - Parsons Revised Rules For Living


So, my best laid plans on this Monday morning were waylaid by dirty socks.

That's right. As I mentioned in The Third Thing, I only brought four pairs of socks with me... that's three, plus the pair on my feet. The same goes with underwear. And one of those pairs of socks is actually a pair of wool socks... which are only wearable when it's very cold. And today, of all days, I ran out of clean socks... except for the aforementioned wool ones, and it's actually too warm to wear them in Cincinnati. (Huzzah!) So I have to wash my clothes. Luckily, I  have access to a washer and dryer, albeit space age ones that look more like Star Wars Escape Pods than home appliances.

My original plan was to go back to the storage unit and get further along on emptying it out. I made good progress on that yesterday... and I will write about that at greater length in Porkopolis, Part 2: The Return of Creepy Louis. I was then going to maybe catch a metro bus downtown. I still plan on doing that... though I may not get to the storage unit today. I'm hoping to cross paths, at the very least with Aaron K, a friend and former colleague, at which point much beer will flow.


The socks -- and indeed, the rest of dirty laundry -- are in the escape pod looking dryer. So that's progress.
But that's not what I really wanted to write about in this blog post. What I really wanted to talk about... again... is Greyhound Bus Lines.
Yesterday, in a conversation thread on Facebook, I made an allusion to... actually I came right out and said... that Greyhound hires psychotics to drive their buses.

I would like to state here and now that I was JOKING. Most, if not all Greyhound bus drivers have been nothing but professional in their behavior towards me during my various trips over the years. They're NOT psychotics. (In fact, I suspect the TSA snaps them up too quickly for any other company to consider using them.)


I would like to point out, however, that a recent article at addictinginfo.org reported that a bus driver left Occupy protesters stranded in Amarillo, Texas because he didn't agree with the OWS Movement.


I would also like to point out that I've been to Amarillo, in the Greyhound station. Being left there isn't as bad as, say, being dropped into Afghanistan, or working in an American factory in Juarez, Mexico. But at 1 AM, when the streets around the bus depot are are dark and you hear the rustling of 10 gallons hats and the rattling of wallet chains... be afraid. Be very afraid.


My point is this: In the wake of the public relations nightmare at the Amarillo Depot, Greyhound Bus Lines needs a champion... or, at least, someone who will make them seem less odious. And I humbly submit myself to CEO David Leach as a willing candidate.