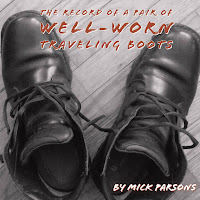 The train passed into mountain time overnight. Now we're in the high desert part of Arizona, rolling towards New Mexico, closer to home.

People are starting to wake up and file into the observation car. The view is gorgeous; the sun started to just peak out, a little west of Winslow. I've been awake off and on since about 3:30, which means I slept pretty well for train travel. I travel coach because while the idea of a sleeper car appeals, the cost ends up being the same as flying and is more difficult to justify. The cheapskate in my skull gets in my way more and more as I age, but it's really only for large amounts. He's perfectly willing to nickel and dime all day, especially when it involves books. And since I stopped drinking, the cheap bastard in my skull is willing to embrace the odd and more than occasional cappuccino. But I can't seem to get the idea of a sleeper car, even though my primary argument for train travel is that it's more civilized than air and more genteel than the grey dog over long distances.

I qualify that, of course.  I take the bus from Louisville to Cincinnati on the regular. But if there was a train, I'd probably take that, even if it costs a bit more and tell the cheap bastard in my head to go to hell.

Although I made my goal of being more open and social during my time in LA, I did not really get to find the bones of Los Angeles. I understand that this ontological distinction probably marks me as a rube, or, at the very least, an provincial hack. But it does seem to be a city where there is so much of everything that finding the real Los Angeles is a bit challenging.

All great cities operate on a philosophy like 3 Card Monte. It's not about finding what's real; it's about never really finding it. Louisville isn't any different. The basic idea of a Tourist Economy is a simple one: distract them with glitter so no one sees the gloom. GPS makes this easier, as entire neighborhoods can be erased without having to start one bulldozer. After all, the powers-that-be don't want total strangers to go and see where the old bones show through.

But that's not what I want to see when I'm out in LA. I want to see the old bones of Los Angeles. I think I catch glimpses of it, in the same way you catch glimpses of nipple during a burlesque show. It's difficult to tell, though, if what I see are the bones or the statistically acceptable brutality of a city that is so expensive to live in that it's losing 100 people a week.

I stopped trying to count the number of homeless folks and camps I saw, just riding around between class and my motel in Culver City. In most cases, they are tucked away, or on public land that has no other use -- which is a good thing, because if it did have use, those people would be pushed off. The camps one block from the train station right on the sidewalk, are probably the most brazen. An entire litle corner just on Alameda had a small community of three tents, and a man was flying nearby. Just far enough away from Union Station not to make it in any of the brochures or website or prime time television show. The homeless in LA are like the palm trees. They're like the excessive number of cars on the 405. They're like random movie star sightings at restaurants that are all ambience and with no street parking.  They're like these small towns rolling outside the windows of the observation car -- a passing curiosity quickly forgotten when the next scene is pulled in our vision.

Barreling through the sunrise
desert dust perma-frost in all directions
like the rolling empty corn fields
stretched ahead on the other side of the river.


Please check out my work for sale on Amazon.
You can also throw a little in the tip jar:
Posted by DirtySacred at 7:52 PM
Email ThisBlogThis!Share to TwitterShare to FacebookShare to Pinterest
Labels: Amtrak, Field Notes, on Not Finding Los Angeles, poetry, prose, Record of a Pair of Well-Worn Traveling Boots, train, travel
Location: Louisville, KY, USA
Older Posts Home
Subscribe to: Posts (Atom)