My head was swimming with ideas when I rolled out of bed this morning, and I've been trying to keep a handle on them until I could sit down and get them all out. That happens sometimes. I normally try to compose this blog with a certain continuity with an echo of the long lost and rarely read essay.

This morning, though, I want to hit the highlights, keep it simple, and move on.

First of all, I want to thank Grindbone brother Kaplowitz (iamkap.blogspot.com) for bringing me onto the 2nd edition of his blogspot radio broadcast. Although the format is uber-brief, we kept it lively and hit a few high water marks. Among them:

It's on this last point that I want to riff first, just a bit.

To all my friends who are still ensconced in higher education, and particularly those who take on the largely thankless quest to teach First Year or Basic Writing:

I am not saying that you are, or that I was, irrelevant. So much of what writing teachers do on a daily basis ends up being a drawn out argument to justify their existence... which is part of the larger problem. A good teacher knows when to get out of the way and let the educational moment run on its own momentum; the bad ones think it somehow has something to do with them.

And since I have laboriously and copiously recorded my issues with higher education, I'll just say this: the problem with education at all levels is two-fold:


The corporate influence on education in this country was unavoidable, however, since our corporate overlords have had their fingers in everything for a very long time. The mistake, often made by people who have been taught a sanitized view of history, is in believing, that the relatively recent incarnation of the multi-national corporation is the culprit.

They aren't. They're merely the inheritors. 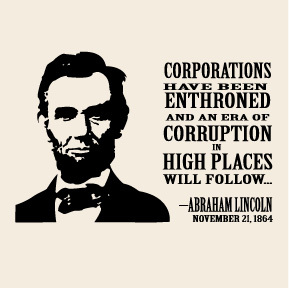 Get the point? I'm leaving out some important players in the leaching of America, but you're getting the point? I'd be willing to bet that since Adam Smith wrote his Capitalist Treaty, there's been some monger trying to get one over by exploiting the work done by other people.

And before you get all horrified, deified, homogenized, and needlessly terrified, let me point out that large scale Capitalism – the massing of capital by exploiting the labor and resources of others – is not the same thing as someone who owns and operates a business. Entrepreneurs succeed by their own sweat. Capitalists succeed on the sweat of others.

This brings me to recent events – the Occupy Wall Street Movement and it's various echo movements across the country. The problem I have is that I live so far off the beaten track that I have to rely on posted video clips and some eye witness accounts that may or may not be legitimate. Getting news online means dealing with spurious sources, trolls, moles, dunderheads, and those well-intended transmitters of information that get lost in the sea of bullshit.

Not surprisingly, the corporate owned media (Disney owns ABC, GE owns NBC, and CBS is a monster all its own. And don't forget News Corp and Viacom. For a list of who's feeding you your news, see this chart) isn't really covering the movement – and yes, I feel pretty confident in calling it that – even though there's clear evidence of something. But, here in the Big Empty, that grand land called the Midwest, it's easy to ignore the movements that may (or may not) help redefine the future.

All I do know is that from what I can tell, I like it.
Posted by DirtySacred at 12:53 PM
Email ThisBlogThis!Share to TwitterShare to FacebookShare to Pinterest
Labels: Expatriate Blues, Parsons Dictionary of Often Used Words and Phrases, Patriotism, Rupert Murdoch, The Long Memory

The more history I read and the more I consider our present circumstances, the more I think I live in Bizarro World.

For those of you who are not imminently COOL enough to know what I'm talking about, I am referring to the cube shaped planet Htrae, where Superman's block-headed alter opposite Bizarro lives:

Because everything on Bizarro World has to be opposite of everything on Earth, this -- again for those of you not comic book inclined -- is a copy of the Bizarro Code:


The implication, of course, is that everything done on our planet is perfect -- or at least, our goal to try and get as close as possible.  And of course, in 1960's comic-speak by PLANET, they mean THE UNITED STATES.

After some deliberation, I've come to the conclusion that if I'm supposed to live in a world where beauty and perfection are the goals, then I'm in the wrong one. As a matter of fact, it seems as if the highest goals and deepest desires of the planet -- and by the planet I mean THE UNITED STATES  -- are the exact OPPOSITE of any attempt to attain beauty, truth, or perfection.

Thus, I can only conclude that I currently reside on Bizarro World.

Because only on a planet such as Bizarro World could Labor Day pass with little or no attention paid to the fact that celebrating Labor -- that is, the Labor Movement -- has more to do with the holiday than fireworks and barbecues. Neither The History Channel, nor The Documentary Channel showed anything about people who work, the history of labor in this country, or the struggle for workers rights and the legalized murder of labor martyrs like Joe Hill and Albert Parsons -- just to name 2; and given the current drive by Tea Baggers, lily-livered Libertarians, GOP'ers, and spineless Democrats to further undercut unions in this country, I sort of thought that maybe one of them might have run something. I don't think PBS even ran anything, either.

The only national news item that ran about Labor was Teamster President James Hoffa calling the Tea Party a bunch of "sons of bitches." Of course, Fox News -- trying, I guess, to distract attention from Der Fuhrer Rupert Murdoch's problems  -- had to give the TB'ers yet another platform by covering the the drippers' condemnation of Hoffa's comments.

On the other hand, I'm not really surprised. Since we are clearly a country of people who have forgotten our history -- accepting, instead, the sanitized, glamorized, homogenized version sold to us in history textbooks -- it's no wonder that we are repeating it.

But since I am clearly on Bizarro World, I should point out one of it's key inhabitants. And no, I don't mean Bizarro Superman, or even Ambush Bug.

The sad part about liking comic books is the realization that in real life there are no super heroes swooping down to save us. Institutions of government and religion and of higher learning have failed us.

That means it's up to us.

Or, you could wait on Ambush Bug.