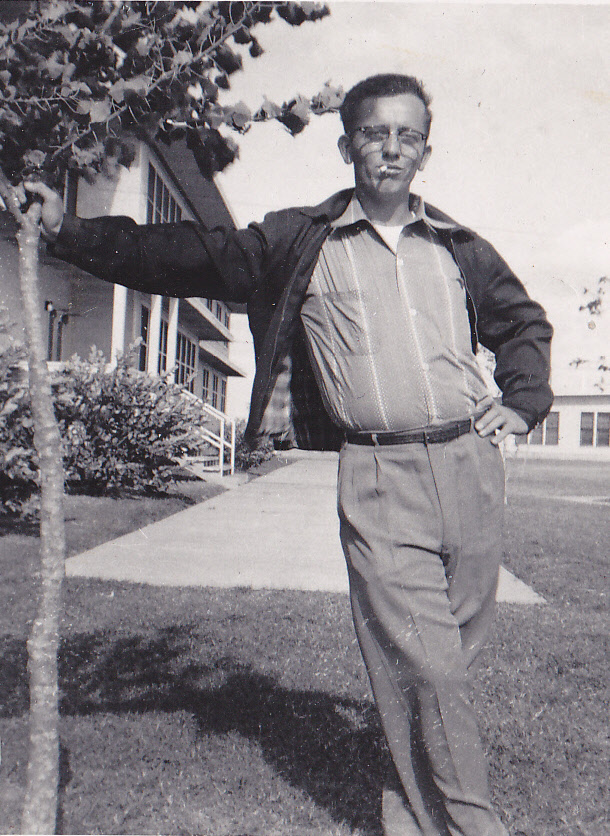 Some stories do not fit in a short format.

With the monthly Moth Story Slam quickly approaching, I've been pondering what story to tell. And with this month's topic being HEROES, I thought I had a shoo-in.

There's rarely a day that goes by that The Old Man doesn't cross my mind at least once. This September 3rd will be 24 years since he died, and while I like to think I've come to understand him as a person and not the larger-than-life myth I created around him as a child, the fact is that even in -- maybe especially in --  his imperfect humanity there's a touch of the mythic about him.

The stories about him are legion. He dropped out of high school at 17 and joined the Navy in time for the Korean War. (I suspect that the military was seen as a last ditch effort to keep him out of jail. He, like his father before him and his sons after him, was born with a chip the size of the Continental Divide on both shoulders.) Joining the Navy taught him three things: 1) that some men are bigger men than others (learned after standing naked in a room with several hundred other young men for induction); 2) that he hated boats (no one mentioned the stress point built into the middle of battle ships that keeps them from sinking during rough waves); and 3) that he hated the bananas.

After his 3 year naval hitch, he remained a civilian for about a year and then joined the Air Force, which he stayed in for 20 years and attained the rank of Master Sgt. Among the things he learned in the Air Force 1) All officers are assholes; 2) there's an art and craft to telling someone to go to hell; and 3) that it was still possible in the 20th century to be banned from a state upon penalty of incarceration. (He was -- let's call it asked -- by then Governor Ann Richards to not return to the state of Texas after a furlough weekend with two childhood friends, each in a different branch of the military. I have only heard of the existence of this letter and have never seen it.)

There are more stories, many that I know, and too many I will probably never know. Except for my immediate family and one cousin in New Jersey, I can't seem to maintain any contact with The Old Man's family. He has two brothers still living -- one who is an extreme misanthrope and another who lives in Colorado who I have only met once. (I was going to go back out and talk to him some more. But thanks to a Facebook Troll during the '12 Presidential Election season and that familial double sawboard should chip the size of the Continental Divide, that second meeting never occurred.)

On the topic of Heroes, The Old Man has always been mine, but I cannot seem to reduce his legend to a good 5 minutes. It seems unfair to his memory, and unfair to the audience. And so I find myself wondering what it is I have to say about heroes.

Don't worry. I'll come up with something. It may even be safe for an NPR crowd.
Posted by DirtySacred at 10:59 AM
Email ThisBlogThis!Share to TwitterShare to FacebookShare to Pinterest
Labels: Family, politics, Screechy Mary, Short Form Long Story, storytelling, The Moth Story Slam
Older Posts Home
Subscribe to: Posts (Atom)