Two people in as many days have died on the streets as Louisville settles into the first cold snap of the year. One of them died next to a local homeless shelter that, in theory, provides overnight protection from the elements for the city's homeless.

The first cold snap is hard because no one ever seems to see it coming -- in spite of past precedence. I see this as a fundamentally positive thing about human nature... it's our ability to hope for the best regardless of experience. But when it comes, no matter how much those of us engaged in homeless outreach try and plan for it, it still hits like a steel toe boot to the nuts.

We did a better than average job planning for it this year. I'm not the only one who obsessively watches weather patterns, so between the merry OCD/ grumpy old men in our group and the lovely folks that donate there money and donate supplies for us to pass out every week, we were able to get a few things together.., hand warmers, sternos, some coats and blankets and sleeping bags.

But there are moments in outreach when the wheels and cogs are laid bare and there is nothing to do except embrace the sadness and anger just so you can find more people before the hot meals get too cold and the supply of socks and handwarmers run out.

We've been serving a younger couple on our regular route for a few weeks. He's a more or less fresh out of a detox program. They say they want to get to Florida, closer to family. Last night was a White Flag night here in Louisville, which means the temperature is cold enough that shelters will open up and allow more than the usual number of people in to get out of the dangerous temperatures.


And when we mentioned that it might be a good idea to get to a shelter, even it meant being separated (because none of the shelters here have facilities for couples or families, which means that couples are separated and fathers have to sleep in a different space than their wives and children). But he told me that since he was on the permanent ban list, he couldn't go in. Not even on a White Flag night.

As far as I know, this couple made it through the night. But the temperatures this week aren't going get better.

Later that night we met up with other outreach volunteers near a new encampment. Another couple. 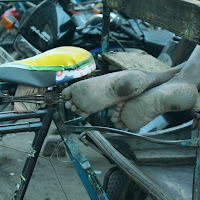 They had a tent, at least, but no blankets, no sleeping bags, no kind of heat. And meanwhile, outside of the Wayside Mission on Jefferson Street, people were sleeping on the sidewalks, some without blankets, and a few with no shoes.

There's nothing worse than feeling like you fell short even when you do your best. And even if there wasn't such a thing as a Permanent Ban List that includes White Flag Nights, the fact is there isn't even enough beds for people willing and able to get into the shelters. The number of homeless folks on the street are up and it only breaks into the public conversation as something unsightly that people don't want to see through their NIMBY sunglasses.

And someone finds them... anger and sadness doesn't quite cover it. Not by a longshot. And when they're found footsteps from a place that, in theory, should have been able to prevent it