Spent the early afternoon downtown. Had lunch with the Market Street Irregulars and then had the opportunity to visit my friend, local artist Heather Houzenga, at her shop at the base of Market Street. We mostly hung out in front of her shop, which lends itself to the opportunity of running into other people. At one point there were maybe 5 of us including Heather, Ray, Dave Cuckler, and Jeff Creath, who split time between Carroll County, Waukegan, and parts unknown with his wife and fellow globetrotter, Kat. There were also two dogs, including Heather's new pooch, Handsome, a boxer mix that is still very much a puppy... but a happy one, and Ray's lovely dog Lady.

It felt good just to be able to hang out on the street without anyone wondering whether something illegal is happening -- one of the graces that is still afforded in a place like Mount Carroll, Illinois.

At one point, later in the day, Dave was downstairs playing guitar and singing, and I was listening through the floorboards. There are moments we experience that resonant, repeat, and carry us backwards and forwards in time, embodying all of our sense memories into a distilled, rich, existential bliss. Listening to Dave Cuckler sing through the floorboards is one such moment, and it let me know that I was, if only briefly, at a place where I still have a home.

Music through the floorboards
that long remembered smile.
A congregation of old friends,
dogs, and peaceful passersby.

The river is high here, like everywhere else. Parts of Savanna are flooding. The power and prestige of the Old River 1 never ceases to amaze me.

The river lays siege to the flood plain
reminding people (again)
these ancient arteries
will wash away
what passes for Empire. 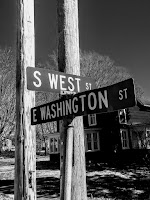 I was able to take some time yesterday and walk around town a bit. On my way back to where I'm staying, I walked up the Washington Street hill and over to S. West Street, by the house I lived in here with my ex. Inexplicably, the place is still standing and there's a family living there.

I know it seems strange to some people that I like coming back here. One local musician, a friend of a friend, upon figuring out that I was actually me and discovering that I showed up intentionally to visit, asked what I was visiting for. There's a basic assumption among some folks about this place... an assumption I hear more from people who are born and raised from here -- that there is nothing here. Or, at any rate, there's nothing here that would be of any interest to anyone not from here.

But the truth is that I learned a lot here. Mount Carroll is the place I learned to embrace a place and find beauty, poetry, and music -- even when there is a (very) thin veneer of stasis, greed, and ugliness. It was here I learned to live more in the moment and to seek out community rather than expect it to come find me. It was here that I learned what the word home means -- with all those fraught implications.

It was here that I learned what it means to dive deep and follow the currents. What I didn't learn here was not to dive TOO deep. I had to learn that later.

Some things persist
in spite of soft memory.
What is not erased
is a reminder that
what we carry in the present
we picked up in the past.

It is the waking that kills us. - Sir Thomas Browne


My first sense memory of Mount Carroll is the sound of my friend and current host (along with his more than patient wife, Julie) Dave Cuckler singing and playing the guitar:

One of the reasons why this place still retains some resonance for me is that I relearned something crucial here. I relearned that people, when given the chance, can get together and do the right thing, and that people will often be kind if given the opportunity.  This place, like me, is a bit quixotic. There are musicians and artists and artisans and writers of all kinds -- some who are from here and some who migrated here for one of any number of reasons and stayed because there's just something about the place.

I also relearned that the rate of goodness or badness of most anyplace is directly proportional to the amount of time and effort you're willing to put in to it.

My temporary return to this place has been the mixture I anticipated. My friends, many of whom were not happy with my leaving, are happy to see me now that I've come back for a bit. The stories of my departure were varied and vague... which was deliberate on my part. The thing I've noticed is that it all gets easier to talk about the more I talk about it. And because I've been visiting friends along the way, I got to talk about it quite a bit more than if I had stayed around town -- which, I'm convinced, would have made things far worse than they need to be.

It's true I ran low on funds... even though people have been more than generous in regards to donating to the travel fund.  But I could've huddled somewhere else and prepared for more traveling. I came back here in part to plan, and because I missed my friends and the sounds of the music.

I found myself talking about this place a lot on the road... maybe more than I've ever talked about any place I've ever lived, including New Orleans. (And I loved and still love New Orleans.)
But I also came back because I have to settle up; that is, I need to finish the recent past so that it's not hanging over me in the future... which means coming back temporarily, finding someplace to store my books and various sundry things until I figure out where to put them long term, and tie up the other loose ends of my  marriage.
Typing that paragraph just now, I noticed how much easier it is to type the utterance than it (still) is to say...
"and tie up the loose ends of my marriage."

I still don't know what that means. I'm still not sure if I'm going to be filing for divorce, or if she is. That depends largely on finances and partly on finding the emotional will to get it done.

Or maybe I have that backwards. It's possible.
Even though it's a thoroughly civil separation -- in as much as such a excising can be civil -- it's not without pain. And I expected it to be a little uncomfortable at times. I expected it to be painful. And I have moments when it is. Mostly because I don't know how not to care and how not to worry about her.

The only thing I have going for me in this regard is that I'm probably way more selfish down deep than I generally like to admit; and I'll admit to being fairly selfish. I don't know how you can be a writer, or an artist, and not be a little selfish with your time. The trick, I'm finding, is making sure to maintain a watchful eye and maintain a social conscience. And lately, that hasn't been too difficult. Between visits to D.C. and New York, keeping up with various Occupy movements across the country that are preparing for Spring, and being vary aware that the over this past weekend around 80 different tornadoes struck a large part of Midwest -- near where I was only weeks ago. The death count is around 30.

And, as if efforts weren't hampered enough, parts of Indiana and Kentucky were hit overnight with snow.

Meditating on this lends me perspective. Mount Carroll, like every other small town, has it's share of drama, infighting, and bullshit. Most of it driven into the public (notably on the City Council) by longstanding bitter rivalries, gossip, and underlying control issues that blossom into full fledged factions, cutting up the town, dividing friends and sometimes family, and doing more to slow the necessary growth and change that will enable this town to survive than the myopic, self-serving Agribusiness controlled County Board -- of which I have even less positive things to say than I do the City Council, which tends to resemble an Elementary School cafeteria, minus the lousy food. It's all words and hollow rhetoric with juvenile digs that gets tossed around.

It's a good thing that they, like the County Board, are only as necessary as people let them be. And at this point, I wonder why we bother with either one.
Since  returning, I've remembered the things I HAVEN'T missed... the juvenile and puerile political leadership, especially... and I'm thinking about pushing my trip up to see if I can go down to Kentucky and Do Something, rather than sit here and Think About It.
That also means getting my shit together here, and quick.
By the way... THIS GUY is an ASSHOLE. Pat Robertson is blaming the people for building houses where there are sometimes tornadoes. Also, he says the people didn't pray enough.
I only point this particular idjit* out in order to illustrate the difference between humanity and douche baggery.. Luckily, I still find more humanity than I do douche baggery. Mount Carroll resonates with humanity, in spite of the back biters that infect local government** and greedy assholes who run the county^.
And it's precisely that humanity that echoes in the songs played by my friend Dave and by other musicians, (who I will mention by name soon enough), and in the art done by friends like Heather Houzenga that will make my short stay more pleasant than it would be anywhere else as I plan the next step.
* For a proper definition, look in The Parsons Dictionary of Often Used Words and Phrases.
** There are one or two people of note who are not idjits. Since I'm not naming any names, I can't name you. But hopefully, Doug and Tom (oops!) you know who you are.
^I'm referring directly to a few people here... but the county is run by three of the 15 current members anyway. And since I've written about them ad naseum when I wrote for The Prairie Advocate News, I won't name them here. No. Really ... Fritz, Rahn, and Riebel. (Oops.)
[Thanks for reading. Remember, if you like what you're reading:
My exit window, for the moment, is still 3/21-4/1, though I'l go back through Kentucky before I head west.]
Posted by DirtySacred at 5:15 PM
Email ThisBlogThis!Share to TwitterShare to FacebookShare to Pinterest
Labels: artists, asshole, city council, county board, Dave Cuckler, farmers, friends small town, gossip, Illinois, musicians, Pat Robertson, return, travel, Wayward Sacredness Mount Carroll Reprisal, winter, writers
Location: Mt Carroll, IL 61053, USA
Older Posts Home
Subscribe to: Posts (Atom)