Writing can be a lonely business. You spend a lot of time by yourself. You struggle with digital age distractions. You count words, you count line lines. You spend time lost in thought, hunched over a keyboard or with pen in hand over the bottomless pit of a blank piece of paper.

The same is true for writers. Although you may always be in some stage of the writing process -- even when you're not sitting at your desk working in words* -- it's important to pull away. Take a walk. Read a book. Go have a drink.

I like to watch movies. Sometimes I watch movies for pure entertainment value; movies I have some sentimental attachment to, or movies that fall under the category my wife calls "boy-man movies."** I also like watching movies that help me think about writing in different ways. I'm going to list three here and explain why

Either you love Tarantino movies or you hate them; this one was his second movie after he made a critical and cult sensation splash with Reservoir Dogs (1992).   One of the biggest mistakes that inexperienced writers make is in how they approach time. A good story doesn't have to operate on strictly realistic chronological line. Sometimes a story benefits from not unfolding how an objective narrator might recount, but in a way that the writer can play with ideas and concepts. For all of the critics that railed against this movie's themes (drug abuse, violence, rape, murder), there is a moral core at its center. Jewels gets to live because he changed paths at a pivotal moment. Vincent pays the price for not changing his life in that same moment. Butch and Marcellus both pay for their violence in varying degrees.

This isn't to say that there's a great "a-ha" moment. There isn't. After all, it's pulp***, not a Minnie Driver movie.

I know what you're thinking. You're thinking why do I include all three when II and III were clearly not as good as the first one?  I used to think that, too. The problem with that way of thinking about any movie franchise is that it rests on an instant gratification function. Sequels rarely measure up on that front. But the entire trilogy, from beginning to end, maintains a tight fictional structure. The world Robert Zemeckis creates is fully encapsulated. Of course it's improbable. It's improbable that Marty's mother, as a younger high school girl, would develop a crush on him. It's improbable that Biff could haunt the McFly family for generations. It's all improbable. Then again, time travel is improbable.

At some point in any piece of fiction, you have to give yourself over to the story. In theater they call this suspension of disbelief. We are pretty good at accepting that. But as a writer, this trilogy represents as tight a structure as you'll find in any piece of writing. It leaves no holes and manages to work over three movies made over 5 years.
Northfork (2003) 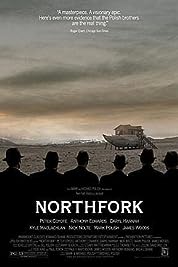 This one is easy to get fooled by. The story itself is simple -- in 1955, a small Montana town is being bought out in order to be make room for a new damn. The modern world is overtaking the old. But there's a whole other story here... a story about a boy who might be an angel, odd divine messengers who are searching for him and who would have found him sooner if not for Nick Nolte's bedraggled and world-worn Father Harlan ability to hide in a small church that the last thing to fall in front of the wave of cold modernity.

This film is probably best example of magical realism that I've seen in English, without subtitles. The worlds merge so perfectly together and create such a masterpiece of problems and themes that every time I watch it, I find something new. Magical realism is difficult to pull off well. It's worth the watch.

If there's a writer on your holiday list, you could do worse than buy them one of these.
_________________________________________________________________________
* I have written before under other blog headings that writers are almost always writing, even when they are not engaged in the physical act of working with words. While I believe that's true, I also think it's important to stand up and move around. I always think about reading in Henry Miller's work where the first thing he would do when he felt inspired was to take a walk.
** I have no excuse. I'm a man of a certain age, having grown up in an increasingly violent age. Sometimes I just like watching things blow up in a fictional realm. It's safer than the news, anyway.
*** Fiction dealing with lurid or sensational subjects, often printed on rough, low-quality paper manufactured from wood pulp.(dictionary.com)

If you like what you're reading here, I have work for sale on my amazon author page:
www.amazon.com/author/mickparsons
Posted by DirtySacred at 9:00 AM
Email ThisBlogThis!Share to TwitterShare to FacebookShare to Pinterest
Labels: art, Christmas, cultivation, culture, film, gifts, holiday, imagination, inspiration, movies writers should watch, presents, The Saturday night special, writing
Location: Louisville, KY, USA
Older Posts Home
Subscribe to: Posts (Atom)