Notes on "the running back" (Anthology of Days) 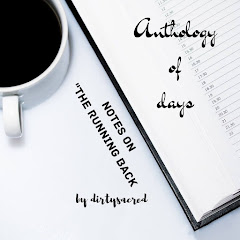 My dad loved football.  When I tell my story -- the heretofore still short and unfinished long form -- I sometimes begin, in the style of Tristram Shandy, prior to my conception.  If it wasn't for family in-fighting and Paul Brown's bromance-style break up with Art Modell, I wouldn't have been born.

When the team debuted in 1968, the Bengals' uniforms were modeled after the Cleveland Browns. When Paul Brown was fired by Art Modell, Brown still owned the equipment used by Cleveland so, after the firing, Paul Brown packed up all his equipment which he then used for his new team in Cincinnati. The Cleveland Browns' team colors were brown, orange, and white, and their helmets were solid orange with a white dorsal stripe over the crest.  (Wikipedia)

When I tell the story, I mention as an aside that Paul Brown lit out of Cleveland in the middle of night with a truck full of Cleveland uniforms -- which has more flourish than saying he actually owned them and carried them off as much out of legal right as spite. Most people don't remember, and even more don't care, and there's only so much back story I'm willing to give in this the Age of "The Internet of Things."

I was never great at sports, though I did try. But I did grow up loving football, if for no other reason than my dad did. And even after he died, I found that watching football was a way to maintain my connection to him in some, almost ritualistic way.  And when I started hearing stories of former players with neurological issues, saw the doping scandals, starting with the death of Lyle Alzado, I started to wonder what it was all about. Recently, the neurological impact of the sport on its players has gotten more attention.  In both cases, someone points out at some point that the players made the choice to enter the sport; and while I think that's true, I think it ignores the socialization of athletes starting in junior high and up into college, as well as the economic urgency athletes from poor families have to "make good" on their talent.

And today is 9/11, and I'm supposed to mention it because that's what we do. We rehash the day, talk about where we were, what we were doing. This 9/11 happens during a pandemic in which nearly 190,000 people have died, millions are infected, and every single one of them is erased as a statistical blip, or worse, a lie under some heretofore unfounded "conspiracy." Today, we honor 2,977 dead while whitewashing the suffering of those who survived -- all while we shrug our shoulders at not only the death and suffering in this pandemic, but using it as an excuse to ignore the suffering that happens everyday. My brother-in-law, who runs a 5K everyday and keeps a go bag packed, calls this "compassion burnout."

A better word for it is "powerlessness."

The running back is just one more sufferer whose suffering is being largely ignored today. He asked me to help read his letter from the Metro Housing Authority because he had trouble finishing it. He needs glasses, he told me. The letter informed him that while he qualified for housing, because of the extreme need for available housing, he would have to wait. I tried to pitch this more optimistically by saying it meant he was further ahead in the que.  I think we both knew that was probably more for my benefit than his; but he accepted it graciously.  That, a temporary chair, and kind optimism was all I had to offer him. And true, I don't know his full story... there's no Wikipedia page link for that. And even if I did, I don't know that I'd tell it here, if only because maybe once upon a time he did decide to play a sport that breaks people and puts them back together like a badly glued ceramic mug. Maybe he wasn't poor and had few options. Maybe he wasn't puffed up his whole childhood to "make good" on his talent. Maybe.

Or maybe a better word for it is "Capitalism."

Read "the running back" here.