For an artist, a good place to be is you have some kind of influence and power to get things done, but in your essence you remain a nomad or a soldier facing a difficulty to be overcome. - Cai Guo-Qiang

This is the night, what it does to you. I had nothing to offer anybody except my own confusion.- Jack Kerouac 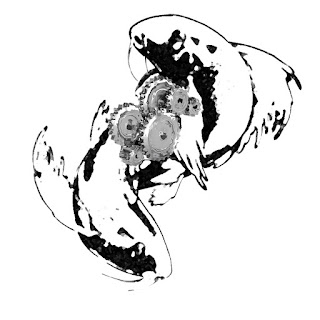 Leave it to a Piscean to muddy up the answer to a seemingly simple question.

But, no. Really. Most of the time, I feel like I'm out of my depth as a reasonably domesticated male. I realize that most take to the sedentary life easily. As a matter of fact, I understand that most people are, by nature sedentary. The whole of modern culture has been the result of people moving to a geographic region and staying there. I get it. I really do. And it is for that reason that, most of the time, I feel completely incompetent in the face of what it is I ought to do when my natural inclinations get in the way.

It's entirely possible that the Puritan drive towards self-immolation somehow just broke down in me. I'm not discounting the possibility that some part or another in my brain wore out sometime between the age of 10 and 18. It's entirely possible that somewhere in the multi-verse ... or hell, in multiple multi-verses... there are other variations of Mick Parsons' who have settled down, gotten that regular job, settled into being a more or less content tax-payer and registered Republican (as many of the kids from my little hometown grew up to be, just like their parents before them.) But I can't seem to get the knack of living and walking through this world without feeling like I'm doing it wrong but that to try and do it the way everyone else does would be an absolute fucking disaster.

That's not to say I'm not happy. I am very happy. And on top of that, I'm very aware that of how lucky I am in that Maslow's Hierarchy sort of way.  Amanda knows this. But when she asked me whether I miss being out more, it did give me a little pause.

I do. In some ways I think I'm better when I follow the current. The universe has a funny way of depositing me somewhere that I will see or experience something worth seeing and experiencing. I felt very much at home in my own skin out on the road. That life isn't without peril, and I don't think it's for everyone. Living out isn't like going on vacation. You may have a general direction or destination in mind, but the routes are often circuitous and longer than intended. There are very few straight lines.

That is, I think, part of the appeal. That absence of straight lines.

The thing that makes it such a complicated question is that while I recognize my natural inclination to wander, the fact is I made a conscious decision to ramble less and stay home more. That's a powerful four letter word, there. Home.

Home is people. Home is a person, as a matter of fact. And when she asks me if I miss being out more, I know she asks, not because she's worried about my happiness but because she knows me well enough to know that some part of me in this and undoubtedly many other multi-verses is meant to wander a pathless land.

When I'm very lucky, I get to take her with me. But even when I she isn't with me in person, she is with me, always.

This reminds me of a little of a story I wrote years ago, called, "The Ballad of Itchy Feet." As far as I know, it's never been published anywhere of note, so I might as well publish it here. Enjoy

The Ballad of Itchy Feet

Once there was a man without a name.  This didn’t particularly bother him.  He never needed one.  No one ever asked him who he was or what he was called; besides, he never remained in any one place long enough for it to become and issue.  His feet did his thinking for him; he traveled or stayed at their whim. When the urge to move struck him, it came as a small itch on the underside of his heels.  A man can get along in the world without a name, so long as he never lingers anywhere so long that somebody might ask for it.

Around five in the afternoon on a day in early September, he came upon a town.  The sky over the town was filled with smothering clouds that had long drowned the sun out of local memory.  Children in the town forgot what the world looked like beneath a sky full of stars.  Day and night had become topics for uninspired Sunday sermons.  The streets were filled with rusty, useless machines—as if people drove them there, forgot their purpose, then abandoned them to the elements.  The men of the town wore gray suits and stared at the sidewalk; the women struggled with chains around their ankles attached to fifty pound weights.  They only had their hands to cover themselves, and stared at the ground out of shame and the fear of being noticed.

The street running through town was walled in with boarded up store fronts and withering trees.  The only open shops were the apothecary and the grocer.  The former was a squinty eyed hawker of cold corn mush, old bananas, and brown bottled water that tore up everyone’s insides.  His brother, the apothecary, pandered bitter remedies that soured the townspeople’s stomachs and rotted out their teeth.

The man intended to continue walking through the town and away, just as he had always done.  His feet pushed him forward, and he was content in allowing them to carry him away from the men and their suits, the women and their weights, as well as the street of rusted machines.  He has walked through many such places, and one more would simply be one more.

Then he saw her.

She wasn’t bound by chains.  Her eyes shine ahead of her like forgotten stars.  She held her head up, unashamed, and was followed by a train of long, red hair.  She was in no particular hurry. As she walked down the street, she hummed a soft lullaby.  The apothecary and grocer squinted, eyed her hungrily, and growled.  They were restless, bored, and tired of being ignored.

For the first time, he forced his feet to stop.  She walked toward him on the street, smiling through him, her face full of forgotten sunshine.  Before meeting her on the street, he chose a name.

One he would tell only to her.


If you like what you're reading here, I have work for sale on my amazon author page:
www.amazon.com/author/mickparsons
Posted by DirtySacred at 9:00 AM
Email ThisBlogThis!Share to TwitterShare to FacebookShare to Pinterest
Labels: home, travel, wandering itchy feet, Water Gears
Older Posts Home
Subscribe to: Posts (Atom)