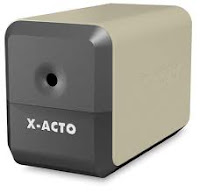 Chuck woke up in the morning resolved to do something entirely different and new from the entirely new and previous he had attempted to do on the previous day. It was, perhaps, a miscalculated attempt; not to mention a bit rash. The new thing – which consisted of Chuck trying to push his pinky fingers into electric pencil sharpeners – proved disastrous... though not for any of the reasons that he had anticipated.
The possibility that his pinky fingers would not fit proved to be a useless concern; as he was naturally slim and boney, and his fingers were feminine to the point of looking almost skeletal, his pinky fingers fit snugly, but easily. He had mentally prepared himself (as best he could) for the pain and the loss of blood, which the shock of both would most likely push him into unconsciousness – an unconsciousness that would leave him unable to explain himself. He had even prepared himself for the messy splatter by wearing his least favorite work attire – a baby blue button down with pleated khakis and the ugly tie he'd gotten from his the office Secret Santa two years ago. The shirt was baggy and uncomfortable and the pants made him feel like he was walking inside a mostly deflated balloon. The tie was particularly distasteful and nothing like he would buy himself. It was brash, with race car red and brash yellow stripes. In the middle of the tie there was a smiley face with a bullet hole in its forehead and a small caption underneath that read “Have A Splendid Day!”
He hated the tie, but kept it because it HAD been a present and he might be called upon to prove he still had it. His Secret Santa that year had been Chuck Wassermann. He hated that he had a name in common with someone who's sense of humor could be summed up by such an ugly tie. He'd even tried to get people to call him Charles – but that did absolutely no good. He had been a Chuck his entire life and he would remain a Chuck forever.
Having considered all reasonable possibilities, it was the one problem he hadn't counted on – the one that, in retrospect, seemed the most obvious – that led to his failure.
None of the pencil sharpeners worked. Not a single one.
He checked the plugs; some of them were unplugged, but most were. They just didn't work. No one used pencils anymore, but no one thought to get rid of the pencil sharpeners. It was as if they were there, but they didn't exist.
At the end of the day, still wearing the powder blue shirt, khaki pants and Wassermann's ugly tie, Chuck left at his usual time, making sure to take one of the pencil sharpeners with him. He was not usually a thief; but he also knew that the only thing worse than being useless was to be ignored.
He made sure to hide just how disappointed he was that his plan didn't work out and that his pinky fingers were both intact. In the absence of a grand and ironic (as he saw it) act, Chuck saw no alternative but to walk in front of the 43 bus – a bus, which, if he hurried, he would be able to catch one block south from the office building, right in front of that after work bar where Wassermann drank martinis and flirted with women.
He caught the elevator down, sharing with a woman in Wassermann's department. She was new. Her name was Delores. Chuck had only marginally noticed her since she was too attractive to pay him any attention, and women never liked him anyway. He stood next to her in the elevator, breathing in the scent of her perfume – which was an unusually pleasant experience, since he was allergic to most perfumes. He took notice of her without trying to be obvious. Well kept, conservative looking. Light make-up. Shoulder length red hair. But he didn't speak to her. As the elevator hit the Lobby Floor and the doors wooshed open in mechanical silence, she turned, smiled, and spoke.
“That's a funny tie,” she said. Then she walked out of the elevator and into the Lobby and away.
Chuck was shocked out his plan to step in front of the 43 bus by his interaction. He spent the rest of the evening thinking about her and tinkering with the pencil sharpener.
By morning he knew what he was going to do.
Posted by DirtySacred at 12:17 PM
Email ThisBlogThis!Share to TwitterShare to FacebookShare to Pinterest
Labels: fiction, office work, pencil sharpeners, Sketch of The 21st Century Underground Man, ugly ties
Newer Posts Older Posts Home
Subscribe to: Posts (Atom)