Losantiville Lines: Year of the Sea Turtle/Second to Last Sub Rosa/Holiday Plus 1

From now on I shall speak in onomatopoeia,
or better, in metaonomatopoeia. -- Lidia Dimkovska


If Christ had been a woman, the world would already be redeemed. - line from Cincinnati Day Book.

Year Of The Sea Turtle 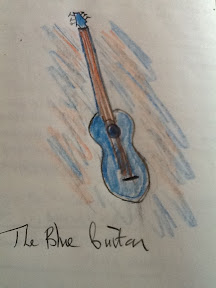 In these post-apocalyptic days, there is time enough to sit and wonder at the inner and outer workings of the world. And for the time being, I am writing my poems, picking out songs older than I am on the blue guitar, and pondering even more closely a work of some length based on some of my travels in the recently dead and buried year of 2012.

If you have been even a casual reader of this blog, it won't surprise you to hear that the weather will play a prominent role.

As I mentioned previously, I am wintering in familiar territory, here in Cincinnati. Although my initial plan was to go south -- very very south, down to the Florida Keys, far, far away from the arctic chill -- the universe saw fit to deposit me here, nearly broke, not terribly road weary, but aware that in order to travel more in the cheap and lowly way to which I am accustomed, I need to pick up some work and put some cash back into the Travel Fund.

I was not unaware of the particular challenge that could potentially be. In spite of what the corporate owned, government complicit media machine has suggested, the economic recovery is not so much a recovery as much as politicians taking credit/laying blame for the pendulum swing that inevitably occurs when Capitalism is allowed to run amok like a lousy houseguest. Any savvy student of economics will tell you that the markets ebb and flow like the oceans and that most people are subject to the typhoons and droughts that occur over the course of time. And any savvy student of politics will tell you that the recently contested Presidential election which set friend against friend, family against family, and peon against peon was largely a contest over who would get to take credit for said pendulum swing and who would get to sit on the sideline moping like a sad chipmunk. (Look at John Boehner and tell me he doesn't have some semblance of a gin soaked chipmunk.)

IF YOU'RE WONDERING WHETHER YOU'RE A PEON, YOU ARE. AND IN CASE YOU DIDN'T KNOW, 99% OF US ARE. IF YOU'RE READING THIS RIGHT NOW AND SAYING TO YOURSELF He doesn't know what's talking about. I'm the last of the Middle Class and doing fine! THEN YOU'RE A PEON, TOO. THE ONLY ONES WHO AREN'T ARE THE ONES WHO PROFIT WHETHER THE MARKET TANKS OR NOT.

But I also wasn't particularly worried, because I knew I'd have a place to sleep and because I have learned to place some faith in the universe. And the universe was indeed kind, because I managed, against any probability in Cincinnati and in this job market, to pick up a little teaching work.

That's right. Someone actually let me back in the classroom.

Not full time. And I'm thankful for that. There is nothing more odious and dysfunctional than trying to teach while carrying the weight of being a full time/fixed term instructor with no hope of tenure and all the expectation of departmental busywork-- committees, non-classroom related paperwork designed to cover someone else's ass and present yours for unwelcome sodomy.

Not me. Not again. I managed two sophomore level writing classes at one of the area universities. In addition, I'm doing some online tutoring and picking up a trickle of freelance writing/editing gigs. This, in addition to poetry, music, and some various other projects, will keep me busy until the thaw.

But don't think that I plan to sit still for the next four months. I will be making regular sojourns down river to Louisville to visit my Most Amazing Girlfriend/Traveler's Angel.

During my most recent visit, I had the pleasure of being the Featured Reader at the monthly Sub Rosa Creative Courtyard, put on by the River City's very own Divinity Rose. The weather pushed the courtyard indoors at Bearno's on Highland, and the venue, perhaps not wanting to offend potential customers with something as perilous as poetry, pushed the scribbled to a small upper room, while leaving the Featured Music/ Music Open Mic downstairs.

This, as I know from experience, is almost always a disaster. Art grows best when writers, musicians, performers, painters, and burlesque dancers all drink from the same trough. It just does.

I was pleased to be asked, though, and went through the first set in the upper room. An increase in snowfall scared off the few folks who were there, and so Amanda and I went downstairs to the bar to join the folks who were there to listen to the Featured Music, Big Poppa Stampley, and maybe play some music themselves. Divinity was kind enough to make some space for me to do my second set, and as I was stepping up on stage to take over the mic, Big Poppa asked if I wanted him to play behind me.

After the shock wore off, I found my words. When someone of his talent and caliber offers to back you up, YOU SAY "YES" AND THANK THE UNIVERSE.

The second set went better than the first, and I even managed to sell a few chapbooks -- which, by the way, are still for sale. Both The Crossing of St. Frank AND Whitman Under Moonlight are in their second printing and can still be gotten for a measly $2 donation to the Travel Fund.

My planned trip down river for Sub Rosa coincided with a week long visit by The Kid, who will be a high school graduate/culinary school bound Mostly Grown Kid come June, and her boyfriend, Plus 1. My Dear Sweet Ma was excited about Christmas, and I was too. This past year was the first in many a year that the entire family had been in the same geographic location. Amanda spent Christmas with her family, and had to work for la machina duex hell the day after, but she was going to go back with me after the weekend and spend New Years with me and the Parsons Clan.

I was excited to see The Kid. Those of you who are non-custodial parents will understand that you take the time you can get. Those of you who are parents custodial or not will understand that as your kids grow up, the amount of time available decreases at a near exponential rate. She was initially amused at the notion that we were both showing off new Sig O's. I'm not sure if she thought that prospect would soften my reaction to Plus 1; but I do suspect that maybe Plus 1 assumed that if he made enough ingratiating comments about my beard that I would overlook his clear lack of guest etiquette.

He managed to work down to My Dear Sweet Ma's final nerve, rarely stirring from the couch except for food, to piss with the bathroom door open, or on the rare occasion that he was asked to actively participate in the goings on. He wore through my limited amount of goodwill by offending my mother, and embarrassing my daughter during a game of Extreme Balderdash with a sexually explicit definition that made me want to forget my promise to myself to try and do no harm and erase a 15 year record of NOT laying my hands on anyone with the intent to do violence by reaching over and snapping his neck.

I did no such thing. But he did reconfirm for me the simple truth that other than Harvey Pekar, nothing good ever comes out of Cleveland.

Those of you with near adult children will understand -- just because you can't tell the kid anything and that she will do what she wants to do regardless of your apprehensions, doesn't mean you don't wish you could spare them the grief. It also doesn't mean you love them any less.