What we spend our time on is probably the most important decision we make. - Ray Kurzweil

In our production-oriented society, being busy, having an occupation, has become one of the main ways, if not the main way, of identifying ourselves. Without an occupation, not just our economic security but our very identity is endangered.  - Henri Nouwen

My kids are in hock to a god they call work
spending their lives out for some other jerk. - Utah Phillips 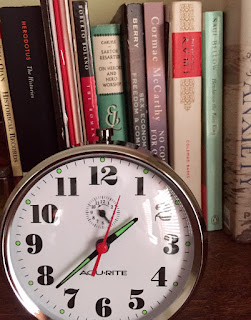 Lately I've been thinking about the indicators people use to define success.

This topic is not a new one for me, and those of you (if indeed, there are any among you Dear Friends and Readers) who have been reading me for more than a few posts and more than a few blogs have probably picked up on that.  If you're one of those who used to read my American Re:visionary blog* and have followed me down here by the river side, you know good and well that I rejected the specter of traditional success, along with all of it's pomps, circumstances, and traps and dropped it somewhere between Butte, Montana and Boston Massachusetts.

Some men** define their success on their income. Some on the kind of house they live in. Some on their golf swing, or what percentage of -- or how many -- cases of beer it takes before they get shit-faced. I've known men who define their success within the parameters of their level of education, their lack of formal education, the length of their beard, and the size of their gut. I have seen men who I suspect define success based upon how big their truck tires are ***. I've known men who defined their success based on how little they slept.  Fathers sometimes mark their success by their children's general happiness and appearance of "success."+

The problem I find with these measuring sticks of what is and what is not success is that they don't really change, and I have found that success -- like every other aspect of life -- changes.

I have at various times, defined my success by my education; by the number of political figures I have annoyed and offended; by the number of bosses, department chairs, and people in socially constructed positions of authority over me I have pissed off; and by the ability to play the trumpet well.++ I thought I reached a measure of success when I was writing for the local-dining-and-concert-guide-that-shall-not-be-named-here.+++

Time is the only yard stick that matters, and the only currency that has any real value. While it's true that I'm not employed^ at the moment, my time is occupied with those things that matter most to me: my art, my family, my garden. I've never particularly felt the need to maintain regular employment as a condition of deserving dignity.  I agree with the idea that a man needs to DO something. But I question the assertion, often made by people who are terribly concerned that they are doing all the heavy-lifting for humanity^^ that everyone needs to go out and "get a job." I see that sort of noise a lot, generally in regards to anyone panhandling. The long history of vagrancy, anti-vagrancy laws, and people general  ooky-ness about people living in some other reality other than that of a worker bee for the capitalist state aside, I have chosen to reject the yard stick for success that measures me against the number of zeros in my pay check -- or, indeed, if I make a paycheck at all.

Yes, I have to find a way to make a living and meet my obligations to the home I'm making with Amanda (love you!) and to my art. Yes, I do like to have a little cash on hand to buy a cup of coffee, to rent movies, buy books, or go argue politics^^^ at the neighborhood watering hole. But I don't need to make piles of it prove anything. And I don't need the trappings of success as defined by the larger cultural imprint that would have judged me as a failure years ago if I had bothered to listen.

I do have my methods of measuring my success, though.

The first is whether I can sleep soundly at night. Most of the time, I sleep pretty well.

My other measure, at least lately, is whether or not my nosy, rude, and overall obnoxious asshole of a neighbor, Chalkline Larry, spies on me. He spies on us a lot. Just this morning, I caught him watching me as I watered our front yard garden. The expression on his face was one of disgust.

From this, I can only conclude that I am living right.

______________________________________________________________________________
*Sorry, no link... it's indefinitely archived until such a time when art, science, and religion can somehow figure out a way to reanimate the corpse of the American Dream without it turning into another zombie.
**While many things are true of all people, I am, probably to my detriment, sticking to a group I feel I have some understanding of. It's true that I have met men who claim to understand women; but as far as I can tell, they are either deluded or liars, or both.
***More often than not, I feel sorry for their love partners. Not because size matters -- but the inability to understand proper proportions leads to someone going to sleep unsatisfied.
+It's the rabbit hole. Success is, in the way, often described with the same terminology as pornography,  i.e.,  "I know it when I see it." And generally, in both, someone ends up getting screwed.
++I was a pretty good trumpet player once upon a time, back in high school. I had trouble picking it up after high school, though.
+++Yes. I hold grudges. It's a failing, but I'm working on it. You can google it. I wrote some pretty good stuff that they didn't, in the long run, deserve.
^ According to the powers-that-be, I am one of the great unwashed masses. But don't worry. I'm sure that Bevin's inhumane policies will somehow lead me to a better billet. These things just take time, I guess.
^^Martyrs All. Without their self-crucifiction, the homeless could use the wood for heat.
^^^ Or sports. Around here, that pretty much boils down to the same thing.

If you like what you're reading here, I have work for sale on my amazon author page:
www.amazon.com/author/mickparsons
Donations are also appreciated, and help keep the critters in kibble and the lights on. Thanks for reading!

Posted by DirtySacred at 9:00 AM
Email ThisBlogThis!Share to TwitterShare to FacebookShare to Pinterest
Labels: art, economics, identity, late-stage capitalism, or a more thought out explanation for my daughter, politics, Roar of the leisure class warrior something towards a draft manifesto, time, work, writing
Newer Posts Older Posts Home
Subscribe to: Posts (Atom)