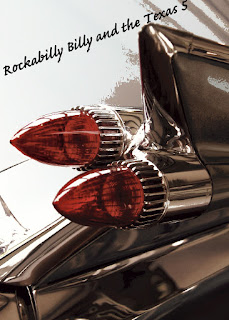 We was at the Treetop Bar. The beer was warm as usual, but cooler than it was outside -- in spite of the altitude and preternatural humidity.

I was sitting there talking with Dolly and Sue, Rex, and Tex -- the younger one -- and Julia Dream. We talked about the heat, about the warm-but-still-cool beer, and the usual kind of things you might think to talk about sitting a top the tallest tree in three three counties and maybe in three states, planted near the Red River at the crossroads of Texas, Arkansas, and Oklahoma.

Julia Dream could just about talk about anything and I'd listen. She knew it, too, and while she didn't take no pleasure in torturing me, she was, at least, aware of the impact she had on me.

Georgie, she'd say. You really need to go find you a nice girl. You tangle with me, you're likely to get spoiled for anyone else. And that would be a shame. You with those pretty blue eyes your momma gave you. You gotta pass them on to a daughter. It's just not proper for a boy like you to have eyes like that.

So we were sitting there talking about whatever we was talking about then someone -- I do believe it was Tex the Younger -- started to complain about the egregious expense of the last music festival he went to.

I don't have no issue with paying musicians,  he said. They earn every penny they scrape together. But you know as well as I do that it's about the promoters. They charge high ticket prices, pay a mere pittance to the talent, and pocket the rest. It's an almighty god forsaken travesty!

Rex blamed the times. He said it was just to damned difficult to find good music. It ain't like it used to be. Used to be, you could expect that if you showed up at the Treetop on any Saturday night, you'd find somebody playing their guitar or pounding on that piano. Saturdays, the very roots of this here tree used to shake! Now all we got is Julia Dream. And she don't even show her tits to make up for the lack.

The entire company laughed. Julia Dream laughed the loudest. Not in your wildest wet dreams, honey. Then she shook her round, gravity defying tits at the room. These beauties ain't for the likes of you ruffians. She nodded over at Sue, who knew how to carry a tune, and Dolly, who couldn't sing but would -- if pushed -- play a mean drum, and said Get one of them drunk enough and if you're extra specially polite they might just grace you with a little hint of nipple.

Both Dolly and Sue roundly rejected the idea, proclaiming to one and all that they were saving themselves for real men, not the ruffians who hung out at the Treetop.

Rex pointed at me and laughed. But Georgie ain't no ruffian. You all going to deny him?

Aw, Dolly said and walked over and tousled my hair. Georgie is a nice boy. He ain't nothing like you haughty reprobates.

Then she sighed and said all the real rock and roll cowboys was dead had their nuts cut off by commercialization.


All but Rockabilly Billy, Sue echoed.

Just then there was a thundering in the distance. Only it wasn't no thunder. It was the sound of a 1959 Cadillac Eldorado convertible with rocket tail fins and a magic V12 with no top end. We all knew it was Himself, Rockabilly Billy, popping his clutch and digging into Oklahoma dirt.

Sue got all excited and said Billy was still on a tear and probably wouldn't be worth a damn on stage anyway. Himself had been on tear since Professor Longhair died. He hadn't picked up his guitar nor sang a note since 1980. He stopped in the middle of a show right, declared that Professor Longhair had died, and promptly drank every drop of liquor in the place. No one had heard him sing in recent memory, and the common talk was that he'd drank and drugged the song right out of him.  People lost count of the fans, groupies, and fellow musicians who came by the bar trying to pull Rockabilly Billy out of his tear and put him back on stage.  Like his last show of any memory in Apalachicola. It took two hookers and a considerable amount of effort just to prop him up on a stool with his washboard cherry red Les Paul.

Dolly smiled and laughed so hard her tits jiggled and knocked Sue's beer off the counter. That weren't no dodge, she said. Billy always did favor ladies of the night.

Well a show would be fun, I said. Could all my friends together. A show might coax Rockabilly Billy out of his desert patio home long enough to put on the hell of a show.

They all looked at me like I was crazy... or worse, a tourist.  The only one who didn't look at me that way was Julia Dream. She just smiled. Her eyes twinkled and leaned over to give me partial view of a heart tattoo over her left breast.

Why Georgie, she cooed. I didn't know you had it in you.

I blushed so hard my lips must have looked blue.