You cannot create experience. You must undergo it. - Camus
I travel not to go anywhere, but to go. I travel for travel's sake. The great affair is to move.
- Robert Louis Stevenson

I'm still working on accommodations in Rugby... hoping to camp, actually, if the weather isn't too oppositional. I don't worry too much about one night here or there, but I AM hoping to be out of the elements somewhat when I'm in Williston. The money I put away towards this trip has gone towards transportation costs and a newer, sturdier pack. (My old one, of dubious Chinese manufacture, barely survived last year. My new blue ruck is tougher, and American-made.) Since the Kickstarter campaign didn't quite work out, I'm having to piece together my shelter. For now, I've got two nights at one of the several motels in Williston... that's Thursday the 11th and Friday night the 12th. After that, I'm hoping something else will turn up.

Because of the influx of people looking for work in the tar sands... not to mention that pesky business about Wal-Mart effectively booting a primary customer base and demonstrating yet again it's poor people skills... there is no place that allows for tent camping in Williston, except for one place: the Buffalo Trails Campground. Having looked them up again as recently as today, it seems there's new management. That's a good thing if any of the previous reviews are at all accurate. Stay tuned for more on that one, Dear Readers.

I'm picking up on a few things in my early research about Williston, one point being so stereotypically American that I expect to see a flock of John Waynes moseying down the street. There are several motels. All of them have a bar. All of them have a casino. I haven't seen any indications of where Miss Peggy's House of Massage and Tea Room are located, but I expect there's some of that, too.

Or maybe that's one town over. I have also read that rent is getting so high in Williston that many workers are living in towns around for cheaper rents. This might account for some of the discrepancies in the population count. The 2010 census came up with a population of 14,716 -- an increase of around 2000 people since the 2000 census. But the fellas on the City Commission estimate a higher population count of at least 20,000. Maybe up near 30,000. The reason for the differential?

The 2010 census didn't count people living in Williston for work.
In addition to fracking and oil wells, agriculture is still listed as part of the area's primary economy. I suspect that the bigger chunk of all that goes to service industries, though. Companies like Halliburton, which provides the fracking technology used by most of the oil companies represented in Williston Basin and the Bakken Formation. 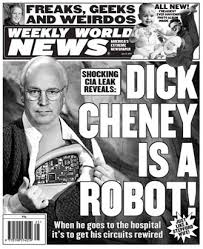 You remember Halliburton, right? Darth Cheney's old outfit? The one that also gets fat government contracts?
As a matter of fact, Halliburton has a corporate offices in Williston.

I expect that getting there on a weekend will prime time for people watching and interaction. I'm hoping to spend enough time there to see what the real story is... the narrative that has yet to be told. There's something fundamentally... AMERICAN in the idea of a boomtown. It's tied into our history, into our mythology, into our sense of who we are. It's tied to our culturally constructed definitions of Democracy and Capitalism. (Still NOT the same thing, no matter what some far right wingers say.)  You read enough about boom towns and American History and you notice a couple of things:

P.S.: It's also tied to that old Objectivist (aka Ayn Randian) Dream: that the only rule that matters is Social Darwinism.

In order to save some money, in order to reduce the amount of time I'll have to kill between stops in Chi-town, I am taking a Greyhound Bus from River City to Chicago.  I only took Greyhound because it was actually cheaper than Megabus... though not by much. The Old Grey Dog, inspite of it's attempts to modernize with free wifi on SOME busses and electric outlets on SOME busses that work SOME of the time, is still missing some fundamentals of customer service.
For example, while Amtrak and Megabus BOTH have very functional and free iphone apps, Greyhound does not. This, in combination with scrapping the Discovery Pass, is one more nail in their coffin, as far as I'm concerned.
Being concerned as I am and being a frequent traveller, I thought I'd given them the heads up. Rather than try and find some contact point in their corporate office... which is difficult to do... I decided to be that it would be best to contact them the way everyone communicates now:
via FACEBOOK.
I sent a short, polite message last night. And this morning, I actually got a message back. If you are a long time reader, you know HOW SIGNIFICANT THIS IS: 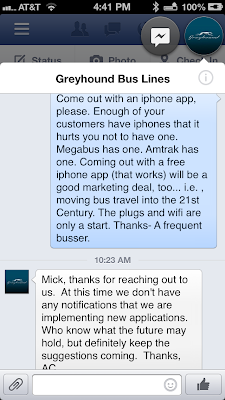