Trying to make Art is a lot like building a fire. You spend your time trying to recreate the effect of a bolt of lightening, usually without true success. - From Travel Journal Though my time in Williston was far more brief than I wanted, and I was not able to camp in Glacier National Park, this jaunt west was not wasted.
First of all, travel is never wasted. There's something about being on the move that unfurls something in me, loosens a knot that does not loosen any other way. Momentum brings my nature rhythms back in time in a way that few things do. Travelling sharpens my perspectives and gives me an even deeper appreciation for the wealth of love I have in my life -- it enables to better appreciate the nuances of my life when I am stationary while at the same time feeding my addiction to a certain amount of movement.
Second of all, the real stuff of travel is not when things go according to plan. Like in the rest of life, the real stuff of travel happens outside the scope of an itinerary.
I was able to satisfy some requirements of my trip to Williston. Drinking in the lounge at the Travel Host Motel, I listened to a 72 year old oil field worker named Larry. Larry looked and spoke like he was chiseled out of the very Earth from which he extracted his living. He said he worked 7 days a week, and rarely took any time off. Apparently at some point he took enough time off to have a family, because he has 12 grandchildren and 13 great-grandchildren.
(He didn't mention how many children he had. From what I know of grandparents, this is not at all unusual. Once the version 2.0's and 3.0's are popped out, the 1.0's are generally nothing more than baby transportation. He didn't mention his wife, either, except to say that he only when home when he had time off and had no choice.)
"These kids," Larry grumbled loudly. "They work five days and think they're being tortured!" If he'd been outside, I think he would have punctuated the statement by spitting on the ground. He said it like he had, many,many, many,many times.
The influx of people into Williston has created not only unusual National attention -- I missed Larry The Cable Guy by a matter of days -- but has put added pressure on what is still a limited infrastructure. Yes, there's all kinds of new construction... mostly rental apartments. But according to Pat, a cab driver, unless you already owned a place before the boom, "You're screwed!"
Rents increased, says Pat from $300-$500 a month to $1,000-$2,500 FOR THE SAME SPACE.
Pat complained that even with the population explosion... she claims closer to 60,000 between the people who live there, the folks who come in to work the oil fields, and "the foreigners who move here to work in the fast food restaurants"... there's still nothing to do in spite of the traffic being a goddamn nightmare. "There's not even a mall," she scoffed. Pat also complained about the absence of a McDonalds.
But, with a conservative estimate of 50 years worth of black gold to suck out of the Bakken Formation, I assured her that somebody, sometime, would build a strip mall. They might even get a K-Mart or a Ross, Dress For Less.
She was not too convinced. But then, Pat was born and raised in Williston, and in spite of there being nothing to do, is still there. Maybe the only thing worse than things not changing is the inevitability that they will.
I also got to meet another writer, Lexi. 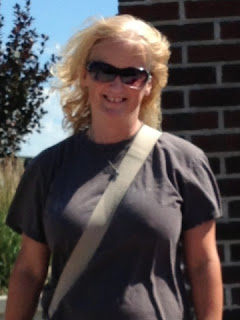 She was going through town,too, visiting the area and writing about the people she meets. She writes a blog called Katwalk for culturekitten.com. She stopped to take my picture while I was sitting in a small park outside the train station, and we struck up a conversation. The thing I like about Lexi is that it's been a long time since I met someone who was actually excited about being a writer. And I mean excited. Most of us fall into this gig because we're not suited for much else... which makes nearly everything else an offshoot of some marrow deep need to scribble. I write for the same reason I breathe, and I make no promises about the artistic merit of either activity.
Lexi was so excited that she was downright bubbly and nearly frenetic. And that is a good thing to see.  An addiction to words -- much like an addiction to travelling -- is not always an easy thing to feed. The difficulty can make it easier to simply take it for granted in favor something that pays more and sustains less.
When I'm Out and About I am often struck by how fortunate I am to have friends and family, to be loved, to be able to find shelter, to have some of the opportunities I have had. It makes me more aware that there are people who have not had and do not get those opportunities. And for those of you who have yet to figure out why I have the political leanings I do, why I put faith in people and not institutions, and why it seems like I'm only getting more rascally as time goes on -- it is because I go Out and About and see this country I love.
And when I run into people like Lexi, I know for sure I'm on the right track.
Posted by DirtySacred at 12:19 PM
Email ThisBlogThis!Share to TwitterShare to FacebookShare to Pinterest
Labels: Amtrak, friends, Mick Parsons, Minneapolis, the fine art of traveling cheap, Williston Semi-Denied, wriiters
Location: Bloomington, MN
Newer Post Older Post Home