self: know : self : pretend / OR not having the proper wardrobe

understanding of oneself or one's own motives or character. (from Oxford Languages)

I think it's entirely possible that I talked myself out of paying work today.

That wasn't my intention. I took the head hunter's call because she reached out on my LinkedIn page. I was very specific about the specific field of work I'm in. I was glad to discover that the head hunter wasn't trying to hook me into some MLM scheme or (gawd help me) sales. *

I almost didn't know what to do. It's been a hot minute, as some they says, since anyone wanted to hire me for anything.  This isn't something I take personally... not TOO personally, anyway. Having spent most of my working life as a contract laborer -- whether as an adjunct, a freelance journalist, or a freelance word slinger / content wizard -- I've learned NOT to take it  (too) personally. In that dark abyss of work to worker chemistry, I've come to understand the forces at work. I've come to enough of an understanding about myself that I try and avoid what I know will be inevitable problems.

Would you be interested in an in-house position once things open up?

Well, I told her, I'd rather work remotely. I have three dogs, we're going to be putting in a garden, and I really don't have the wardrobe for it anymore. The only tie I own is a $70 tie I bought in a fit of pique in the process of buying my wedding suit in 2015; as a matter of fact, I didn't learn to tie a tie properly until I was almost 25 years old, and it's information I only access on special occasions ... that category of knowledge I (broadly) include with euchre and my proficiency at wrapping Christmas presents.*

But I did talk enough jargon that hopefully she'll remember me for something remote. I know my shit. I'm just at an age where I think it's ok to be particular about who I sell my time and my shit to.

I also really hate clothes shopping and I feel like if it's a job I can't wear a flannel while doing, it's probably not worth to me in the long run to do it.  True, I used to think of it as a disguise -- putting on the workaday dog and hiding amongst the capitalist locust eaters.  But then I found out that one of my literary heroes, Kurt Vonnegut, was right: 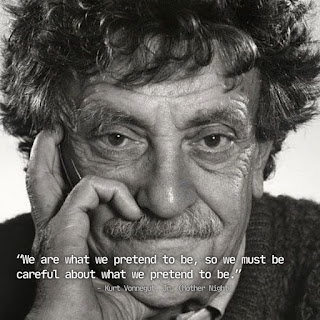 Whenever I try and "fake it" I end up self-destructing. Even my wife has remarked about this, and gawd lover her, her only commentary was that the timing generally blindsides her.  Not the self-destructing itself. Just the timing. And that, friends and readers, is wisdom far exceeding my own. And I take it to heart. And try to learn.
Even if there are those who think I might be learning the wrong lesson.

*Both things I know too much about because of past jobs I took out of the absence of self-knowledge.