Debriefing of a (failed) marketing campaign: Notes from April 2020 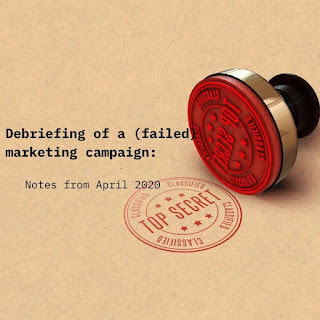 Rain today and tomorrow. Some wind now. I don't mind rain or the raggedy yard. I'm making peace with the hole in the roof until the rain ends and the roof is repaired. My ankle is healing, though my hip still aches from stepping in the sump pit, especially during the wetter winds.

Was a time I'd make myself see

the positive – that maybe

our capacity to learn will overtake

our need to make the world burn –

that we can rebuild out of these ashes

The first End Times galloped after me when I was four, tried to choke me in the night. The world was burning then, too. And it has been trying to kill me ever since.

It's difficult to tell whether the marketing campaign failed because the consuming public never accepted the death of the Kennedy Brothers. Or something deeper. Something more congenital. Something bred in the bones that, as the Bard says, must will out in the flesh.

Pale fuzzy globs born to be men but too fragile and sugar-based schlep and schmooze through the streets, dinosaur death reenactors, trying to conjure that hobble into being yet again, with new cheap packaging wrapped around the the same necrotic flesh.

and what remains will be illegible

Now's no time to retreat

to some fabricated notion of civility –

and send them to the capitol of Arkansas.