My Last Sermon; or, why I don't play Pokemon GO

Blessed are they that hunger and thirst after justice: for they shall have their fill. - Book of St. Matthew, 5:6 (DRV)

Lately I've been thinking about the last sermon I gave. I was 14 years old. The minister of the church I attended while growing up supported my decision to dedicate my life to the ministry* by working with me to explore the nature of the vocation. I studied biblical and theological texts; I went on hospital and home visitations; and I was allowed to give a couple of sermons.

Let me add that stepping up into the pulpit for the first time is a uniquely terrifying experience. There is a kind of invested authority there which does not exist anywhere else. There also a special kind of isolation there, too. People generally do not like their preachers to suffer from the same human failings everyone else does. It's as if those who hear the call are supposed to be suddenly touched by the divine in such a way that all manner of arrogance, fear, greed, hatred, and ignorance are washed away like a hard day's won dirt.

Clearly, that is not how it worked out for me.

I chose Matthew 5:14** as my subject -- what is referred to as the "City on a Hill" section right after the Beatitudes***. The verse is one that gets a lot of treatment and a lot contextualization and re-contextualization. My focus was on how, after the Beatitudes earlier in the chapter and before the call to action that comes after, that it isn't enough to simply identify as a Christian. Mere existence and religious self-identification is not enough. Through his life as recorded in the New Testament, Jesus helped the poor, broke down the false caste system that elevated Pharisees above tax collectors and prostitutes, and preached against greed, hollow words, and empty works. He also acted out in righteous anger at the money changers in the temple. To be the light of the world is more than wearing a name tag, and more than walking into a building on Sunday. To be the light of the world, the salt of the earth, the city on a mountain means DOING, not just BEING. Being a follower of The Christ is an ACTIVE VERB, not a PASSIVE one.

As a student of history, I watch current events through the lens of someone who has read not only Pliny's history of the fall of the Roman Empire, but also about the rise of Franco in Spain, Mussolini in Italy, and Pinochet in Chile. I've also read about and watched the long history of nationalism in America, the violent power play of capitalists, as well as the divisive and violent racism and sexism that have long run the undercurrents of America.^  I have made my position clear about certain current events: Trump's neo-fascism, Clinton's neoliberalism, and Sanders as NOT a revolutionary figure.

The violence last week with the death of Philando Castile, Alton Sterling, and the five Dallas Police Officers make one thing very clear: the rhetoric is far more important to the powers that be than any of the blood spilled.  Wisconsin is next in line to suggest "Blue Lives Matter" Legislation -- which would make the killing of a cop a hate crime. The very same people who rally against increased gun legislation, pointing out that more laws won't solve the problem, are themselves calling for more laws.

And, true to form, the far right is trying to co-opt the wording of protest in order to change its meaning.^^ Blue Lives Matter laws not only insult the purpose behind hate crime laws, but is an attempt to negate the essential message behind the Black Lives Matter -- that systemic racism puts Black Americans at a higher risk for violence at the hands of The State.  While it's important to keep in mind that economic violence impacts people of all ethnic backgrounds, there is nothing wrong with people within the black community trying to organize and defend their community. 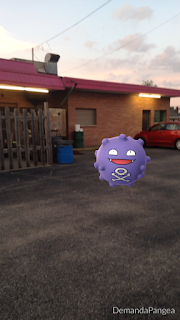 The other big ticket media item over the last week, besides Bernie Sanders' capitulation to the Clinton Political Machine, is the Pokemon GO explosion. Between the phenomenon surrounding the new hunt for Pokemon in real time and Samsung Galaxy's VR goggles, augmented realities are becoming... well, a reality.

Not that augmented reality is anything new. Italian writer Umberto Eco wrote about hyper reality in 1973. Reality TV and the myopia created by being able to fine tune our online experiences to a specific and individual reality have already cemented our cultural interest in being distracted by an augmented reality. Simply retreating to the movies or to television -- streamed or otherwise -- is not enough.

I don't have anything against playing games. I probably majored in Grand Theft Auto in graduate school as much as I did writing. There's a lot in the world that drives me to want distraction and avoidance. I'm an expert at avoidance. And there's a lot I'd rather avoid.

If you like what you're reading here, I have work for sale on my amazon author page:
www.amazon.com/author/mickparsons
You can also leave a tip if you'd like. Thanks for reading!