Part of outreach means we end up seeing some the same people over and over. Sometimes we don't see certain folks for a span of time because they went inside, or got sober, or started getting treatment for their mental or addiction issues.  And that's always a good thing. I'm always happy to see our folks, but there's a few that I would be happier to never see again, if only because they need to get off the street for their own safety or health.

But sometimes we don't see people and we feel the dread in the pits of our stomachs.

The area around Wayside Mission is a heavy population area, not just because of the homeless shelter, but because of the large homeless population that lives adjacent to the shelter. Some of them won't go in -- concerns over safety, petty street feuds that spill over or are exacerbated by the shelter's policy of giving some residents the job of policing the others, regardless of their capacity to be able to do so, and the shelter's policy of splitting families --  and some of them can't because of legitimate bans due to violence or drug use that endangers other people.

Amanda and I hadn't served down there in a while because of shifts in the population and changes in the routes over the last year that we hope does a more effective job of serving as many of the community as possible. Historically, people have been run off from the downtown underpasses and around the shelter at three watershed moments here in Louisville: before Derby, before the State Fair, and when cold weather sets in. The motivations for these are different, but not really. The city likes to "clean up" it's image for big money events like Derby and the Fair, and whitewashing the city's homeless community is one way, besides planting more rose bushes and cutting the grass along the highway, that the city does that.

LMPD annually engages in a more focused harassment of the city's homeless at the onset of cold weather, apparently for the benefit of the homeless. By all accounts, the thought is that by putting pressure on the community to move on, the city is helping push them to the shelters or other services. 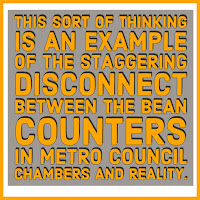 This sort of thinking is an example of the staggering disconnect between the bean counters in Metro Council Chambers and reality.

But as the official and unofficial sweeps continue, it never ceases to amaze me who is able to fall through the cracks. This past week, Amanda and I went with the route that currently serves the underpasses as extra support and to make it easier to pass out meals and supplies.

We were also tasked with finding a family that had been in the area the last few weeks -- a couple with two small children. Usually, we serve them in their vehicle, but they have insisted to outreach workers in the past that they go into Wayside at night. This isn't the first time we've heard this, or seen it in practice. The city has very limited resources for homeless families. So when they do go to shelters, families are split up.

This is one of those cavernous niches that the homeless fall into; because even when there aren't any children involved, and even if they can prove they're married, couples are separated -- effectively isolating them from the one person they count on for mutual aid and survival. And while this can sometimes help vulnerable people escape dangerous situations, the families are collateral damage.

We didn't find the family. Their vehicle was not even parked out front, in spite of the fact that it was spotted earlier that afternoon when the kids were riding their bikes on the street. If we had seen their vehicle, that would have meant they were at least in the shelter waiting room before the staff at Wayside split them up for the night. Because it wasn't there, there is no telling where they were on a night when the overnight temperatures were going to reach freezing.

Sometimes it's who you don't see that gets to you.