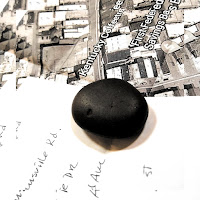 The 6:15 AM bus leaving Louisville and going to Frankfort drops off at the Wal-Mart Supercenter on Leonardwood Drive. We rolled in on time, a little after 7 in the morning, just as the sun was breaking the horizon.  I end up being in Frankfort, for one reason or another, two or three times a year. And when I go, I take the bus. It's a holdover commuter route between Louisville and Lexington with a stop in Frankfort. The early bus isn't heavily populated. I've ridden it at different times and it's rarely a full bus, which is just fine with me.  I just hope the line stays open.

According to Google, it was only a 3.6 mile walk from there to the Kentucky CoffeeTree Café. Not an unreasonable distance, and the morning was still cool with a light breeze. I'd gone through the trouble the night before to look it up and to even print maps out; I wanted to go more lo-fi and not depend on the step-by-step of GPS, which I credit for a share of civilization's downfall.

LO-FI. I've felt increasingly tethered by technology -- annoyed by its reach, unraveled by how central it and it's non-stop market-researching/spying is shaping the reality I share with an increasingly large amount of humanity. So I decided to take this opportunity, this trip -- a relatively low-stakes scenario as travel risks go -- to assert my quasi-independence from The Matrix. *

I started off without difficulty. Between studying it the night before and somewhat from memory. I felt pretty confident, pretty comfortable. And the directions weren't complicated:

After that, a bit more of a walk, crossing the lovely little bridge . over the Kentucky River that cuts through the middle of town, a few blocks and one easy turn to West Broadway.

As Google flies, the walk should have taken me a little over an hour. I know from experience that I can't trust Google Time; I walk a bit faster than I used to, but I don't walk anywhere near as fast as Google Man can. I had plenty of time to get there at my own pace, so I wasn't worried about that, either.

I wasn't especially worried until I'd been walking for a while and I didn't seem to be getting any closer to town. I passed one guy waiting for the circulating local bus, but it didn't register that I was walking the opposite direction that the bus was going to go.

By the time I figured it out, I was almost a mile out of town.

Oh feet how oddly you fail me
carrying me on, away
from where I'm supposed meet
my friend, from where the map says
I need to be where I'm pointing

Thanks for reading! Listen for "Lo-Fi, Part 2 in Episode 11 of A Record of a Pair of Well Worn Travel Boots on iTunes, Spotify, GooglePlay, Stitcher, and TuneIn.