Near where that barn burned, where all those people died, Part 2

Toil on, son, and do not lose heart or hope. Let nothing you dismay. You are not utterly forsaken. I, too, am here--here in the darkness waiting, here attentive, here approving of your labor and your dream. ― Thomas Wolfe, You Can't Go Home Again 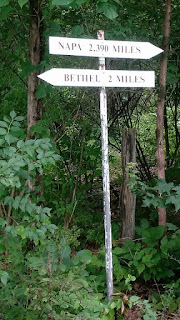 The problem with homecomings is that nothing ever goes as planned. Other than two uncles I rarely see -- my Uncle Jack (my Mom's brother), who travels and my Uncle Bill (my Dad's brother) who hasn't shown any interest in talking to me since my Dad died -- I don't have any family in Bethel who is above ground.  The last time I drove out to Bethel at all was to take Amanda to see the family graves in the cemetery. That was before we were married.

We left from my Mom's place in plenty of time. The hour-long drive from Cincinnati to Bethel followed a route that was burned in my brain.

Beyond the I-275 loop, past Withamsville, and past Amelia, the geography both stretches out and gets more crowded. When you have a longer memory for a place than that place has for itself, and when land developers erase the long empty fields between towns and merge it all together in one long strip mall world, it's easy to let a bitter form of nostalgia take root.

Nostalgia is that idea that somehow, the past we remember is without question better than the present moment. Nostalgia is among the second worst lies according the ranking system created by former British PM Benjamin Disraeli . Nostalgia is the entire underpinning for our current way of life in dear ol' Trumplandia.

But I still do That Thing when I visit my old stomping grounds. I talk about buildings that aren't there anymore, like the grocery store on Ohio Pike that was my second actual job, back when I was learning about the weight* that money has in the world. Or the Blue Haven Restaurant our family would eat at on Friday night sometimes that served actual salmon croquettes and had actual homemade apple pie on the dessert menu. Or the fields that used to be the Old Man Wolf's farm, fields I used to sneak into and wander around when I was a kid, that was cut up and sold by his children and razed for the cracker thin foundations of McMansions. When I was a kid, I used to tell people that Cincinnati would eventually reach out and swallow Bethel. Right now the only thing stopping it is something as arbitrary as a county line... though I'm sure if they could find a reason, they'd find a way around that, too.

For all the changes, though, Bethel really hasn't changed that much. There are still more churches per square mile than anything else and the Gold Star Chili is still standing next to what used to be my high school. The only thing that really DOES change in small town is the signage and the occasional new coat of paint.

Although I guess that's not really true, since Bethel, which is in Tate Township, which has been a dry township for as long as it's been in existence thanks to the aforementioned overabundance of churches, can now brag of the existence of a winery. The winery is less than three miles from the house I grew up in.

Now all they need is a decent Chinese food buffet and they're ready for some serious Yelp! action.

Amanda and I drove out to the winery. It wasn't difficult to find. It was just odd that it was there. I used to ride my bike up and down Swings Corner-Point Isabel Road. I didn't need GPS.  The weirdest thing about it was that it was there... some hidden spot of something resembling civility in place buried in the backwoods of my childhood.

When we arrived, no one else was there. I wasn't surprised. Then we checked the Facebook Event Page and discovered the meeting time had been moved back to later in the day.

The owner was as perplexed as I was. She had no idea there was a reunion meeting there. The panic was etched into her face -- a face I thought I recognized but the last name tag on her shirt I didn't. I told her not to worry. Planning, details, and follow through are not attributes anyone thinks of when my high school comes to mind.  To be fair, although the event was posted on Facebook, it was pretty clear the "non-reunion reunion" was for alum still living in the area. Those of us who left -- those of use who escaped -- were not part of the thought process.

It may seem like I'm being unfair to my old classmates, most of whom probably gave my absence as much thought as they gave my presence in high school. But the truth is, people live where they are, whether it's the cafeteria table where they eat lunch with people they consider friends, or whether it's a Facebook event created by people who still live in the geographic center of their childhood. It wasn't so much that I was excluded as much as I'm not a part of that world anymore. It's entirely possible that I never was. Not really.

Amanda and I drank our wine and left. On the way out of town, we stopped and at the Gold Star Chili next to what used to be my high school. Because sometimes nostalgia tastes good, even if it's not good for much more than that.

If you like what you're reading here, check out my work for sale on Amazon: www.amazon.com/author/mickparsons You can also throw some in the tip jar to help keep the lights on (Thanks!)
Posted by DirtySacred at 9:00 AM
Email ThisBlogThis!Share to TwitterShare to FacebookShare to Pinterest
Labels: Bethel Ohio, class reunion, homecoming, near where that barn burned where all those people died, Part 2
Location: Louisville, KY, USA


If you like what you're reading here, check out my work for sale on Amazon: www.amazon.com/author/mickparsons You can also throw a little in the tip jar:
Posted by DirtySacred at 9:00 AM
Email ThisBlogThis!Share to TwitterShare to FacebookShare to Pinterest
Labels: Bethel Ohio, class reunion, geography, going home, Harmony Vineyards, home, homecoming, near where that barn burned where all those people died, Part 1, rural, small town
Location: Louisville, KY, USA
Older Posts Home
Subscribe to: Posts (Atom)