Exile is more than a geographical concept. You can be an exile in your homeland, in your own house, in a room. ~ Mahmoud Darwish 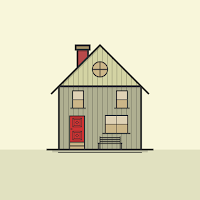 Although I haven't lived in my hometown for better than several years and I rarely go back, I do follow some of the comings and goings there. There's an insatiable fascination about the place for me, in spite of the fact that there's nothing there for me but cemetery stones and geographically bound nostalgia. Think of it as something akin to voyeurism.

Recently on the Facebook page for my hometown's historical society I noticed an event. Five local authors were going to converge on the historical society... the old Grant Building where the library was housed when I was a kid ... to talk about how they became writers.

Each of them, I suppose, had written and published books. I only knew one of the names because other than random and terrible violence and the odd billboard paid for by a local church  proclaiming that Satan had taken over the school board, the only thing my hometown ever made the news for was the fame of the The World Walker. No one remembered him leaving on his trip, but everyone was there for the return, including a parade, a key to the village, and an invitation to speak to high school students about his experience.

Now, although I've made my home a few hours south and on the other side of the dirty, sacred river, the fact is that as much as I have no place or purpose in the place I'm from, I'm a transplant everywhere else. I guess it's fair to say that I haven't made The Big Time. There are no parades or keys to the town with ubiquitous invites to talk to ungrateful high school kids about my accomplishments.

Probably one of the most challenging parts of being a writer isn't actually the writing. That's always been the easier part. I don't believe in writer's block and I reject the idea that creative energy fizzles. It changes channel and sometimes doesn't march with popular tastes and trends, but generally the writers who chase trends end up burning themselves out -- not because their creativity fizzles but because they cut themselves off from it a long time ago and decided to sustain themselves on praise and marketability.

The biggest challenge for me has always been the subject of tradition... literary or otherwise. Although I don't remember much from when my thesis defense*, I do remember Dr. Glenn Colburn asking me where I would place myself in the canon of American Literary Tradition. I don't even remember exactly what I said because I was a bit taken aback by the question. I managed to write a collection of integrated (hopefully) poems and short stories. It was probably incredibly abstract and most likely total failure. My graduate advisor asked me once if I thought it would end up being publishable. My answer was that it probably was not at all publishable, because there was no way to categorize it in any way that literary agents and the publishing world would or could understand, or in such a way that agents and publishers could excise their percentages from sales.

I'm still pretty good with that. And I'm still pretty good with probably being a little too left of center for poets and a little to right of center for fiction writers. But it does sometimes nag at me that I grew up in  place that so assiduously tried to erase its history that I've been running all over the place for 30 years or more trying to find one, only to keep running into one inescapable fact: there is no such thing as adopting a literary root. Either you're born with one, or you cobble your own from the flotsam and jetsam of experience. It's that or it's creative death.

I guess it's OK that they didn't invite me, being as I'm not as news worthy as a guy who tried to rob a bank with a pocket knife (in my graduating class.) I suppose it's OK that I still can't answer the question of where I am in the scope of American letters because I'm not a Louisville writer or a Kentucky writer or, really, an Ohio writer... or even a Bethel, Ohio writer.

If you like what you're reading  here, check out my work for sale on Amazon: www.amazon.com/author/mickparsons You can also throw a little in the tip jar: