Social Distance Diary: A Walk in the Park

For me, trees have always been the most penetrating preachers. - Herman Hesse

I love being out in nature, and I count it among my blessings to live where I have access to a park system designed by Frederick Law Olmsted. He, like John Muir, had an inkling of humanity's relationship with nature, and of our need for it.  More people know that Olmsted helped design Central Park in New York than know he designed "The Big Three" parks in Louisville.  At the core of his design philosophy was an idea that may have come to him when he was traveling in secret across the Pre-Civil War south and writing the articles that would eventually become The Cotton Kingdom: that it nature should be left to be nature because that's how it best serves people. (Never let it be thought that he was some prescient eco-warrior, because he wasn't.) He was very much opposed to manicured landscapes that were very much in vogue... a manicured look that was meant to suggest mankind's dominance over nature.

Iroquois Park was originally designed with this in mind; and even though some very unOlmsted-like things have been added over the years, the amphitheater is a boon to the south end and to the city, the playground is well maintained, and while I'm terrible at basketball, I don't begrudge anyone a pick-up game in non-outbreak conditions. A large part of the park is still maintained much like Olmsted imagined it. Fallen trees are allowed to rot where they fall as long as trails aren't blocked. During our walk, I noticed where a tree that had fallen across the horse trail was simply cut in the place that blocked the way but left on both sides.

As humans -- as monkey not long from the trees -- we sometimes can't help ourselves but to leave a mark. Amanda asked me on our walk if I ever carved my initials into a tree. No, I told her. I always felt bad for the tree.

This expression of hypersensitivity didn't surprise her; she knows me too well.  She pointed out, though, that as long as the carving doesn't go all the way around the circumference of the truck, that it will simply grow and expand with the tree.

She wasn't asking because she wanted to carve our initials into some poor tree; but she did notice I was taking pictures of some carvings that attracted my attention: 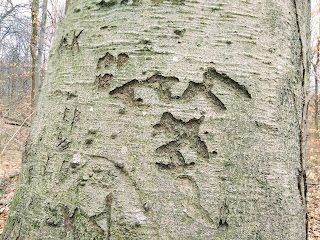 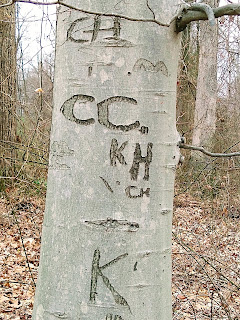 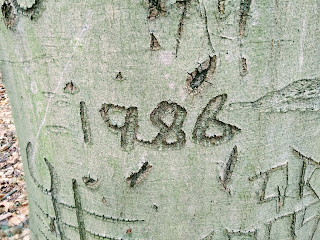 While I can't bring myself to make such marks, I do appreciate that the tree carries on in spite of it for the most part. I suppose if I felt like I had permission to carve into a tree, I'd consider it. But I'm not one that the trees have decided to talk to. Not yet, at any rate. 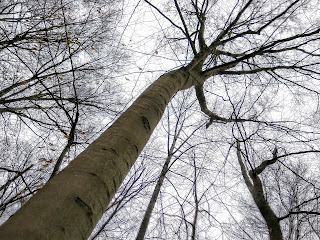 I was talking to an old friend recently who takes stunning photographs of far flung places. He told me  that a person gets some perspective when he stubs his toe on a 5000 year old tree. This tree may not be that old, and I (surprisingly) didn't tub my toe on it. But I derive a great deal of comfort from it, and the others being there.