Now the boss the law is stretching /Bulls and pimps he's fetching/And they are a fine collection/ As only Jesus knows. -- Joe Hill, Where the Fraser River Flows 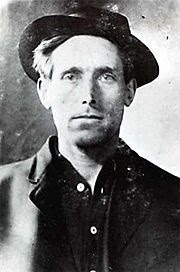 97 years ago today the state of Utah assassinated Joe Hill by firing squad after a kangaroo conviction for the murder of Salt Lake City grocer John Morrison and his son. According to legend, his final word was "Fire!"

I use the term assassinate deliberately. The evidence against Hill was flimsy, and the only reason they bothered with the firing squad was because the first bullet intended to silence him without the bother of a public trial didn't do its job.

After, according to the legend, Joe's ashes were sent to every state in the union-- except for the state of Utah, at Joe's request; he didn't want his remains to ever exist in the same state that murdered him.

Those of you familiar with his legacy know that his final exhortation to
his fellow Wobblies was not to waste time mourning for him, but to organize. Joe Hill believed that an organized and honest union was the only thing keeping working people from being exploited by organized capital -- those who get rich by mooching off the sweat of others than by their own work.

Today isn't the only day Joe Hill crosses my mind, of course. I enjoy the music he left behind -- those old Wobbly standards, many of them written to parody religious hymns -- and I thought about him quite a bit when I was Out and About earlier this year. I wrote earlier in the year about Cletus the Dog Man, who I met in Rapid City South Dakota; he was one of many I ran into or saw or overheard who were simply out looking for work. Most of them had no interest in leaving the place they thought of as home. But they felt like they had no choice.

That's part of the impossible situation created by those who have political power and influence in order to keep those of us who really have the power from ever being able to exercise it. If there's no work where you live, you're supposed to have the guts to pack and go find it -- as long as you have the gas money or ability to travel, of course. And if you can't do that, well, you're shit out of luck. The Michelle Bachmans and the Rand Pauls of the world would say that maybe God doesn't want you to have a job.

And don't forget the other caveat: if you DO travel around looking for work, don't travel by bus, because that means you're white and/ or ghetto trash and automatically a homicidal maniac and rapist.

Or, as I was mistaken for twice, Mexican.

In other words: work and pray,live on hay, you'll eat pie in the sweet by an by.

I do appreciate Joe's sense of humor. Though fewer people know the hymns, the parody is still a good one, and the satire is apt. The 21st Century is shaping up to be a repeat of history we've already lived but seemed to have learned nothing from.

Two Clips: A Story and A Song