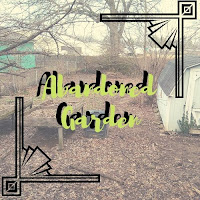 Between true-to-form pure Kentucky Fool's Spring and the various indignities of being closer to 50 than to 40, it's taken longer to get started than I would prefer. And since I'm getting ready to head out of town... taking the old gray dog down to San Antonio to AWP, the annual confluence of academics, writers, and publishers of same, I wanted to at least get started on the Abandoned Garden by working on what we have here: the bones of it:

1. move and prepare the raised bed
2. start clearing out the shed so it can be torn down
3. begin prepping the ground to plant red clover.

What we got done was moving and turning over the soil in two of the raised beds. That took considerably longer than I planned, if only because we made the huge mistake of not keeping the beds covered since we harvested the last garden two summers ago. Between the time weather, breaking up the soil was like breaking up layers of shale in places; but the soil... which had nice mixture of compost as well... is, once broken up, rich and plant ready with very little work, which Amanda and I were both pretty excited about. 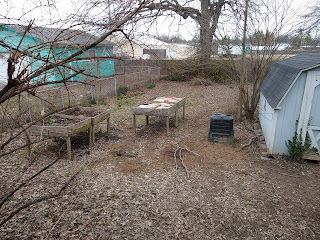 We moved and turned two beds, leaving two beds left to move and turn. We also moved he compost bin over, giving us a chance to turn that over to get it ready to use for our planting this year. The raised beds tend to work well for greens (like chard), herbs (basil, mint, thyme), peppers (Banana, Serrano,  and Jalapeno primarily, but we've done ok with sweet poblanos, too), and one summer of rampant cukes that nearly undid the peppers and taught me to NEVER plant viny plants in a raised bed and expect them to share. The two beds to the right are the ones we moved. Anticipating some upcoming weather... because, you know, Fool's Spring... we covered those two beds with cardboard and weighed them down with some cement edging that's pretty much useless in its previous position of keeping critters out from under the shed.

Tearing down the shed will end up being it's own mini-project; there's a huge hole in the roof (not visible in this picture) and we're thinking of using the space to either expand the garden or add some chickens to the menagerie. 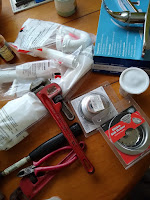 One of the things about an old house is that you inherit not only old house problems, but also the "fixes" that previous owners made.  This issue, though, is a fairly common one, and not one  I can blame (really) on the former owners. Faucets wear out. drains and pipes need to be replaced. In our case, we also need to remove the garbage disposal because it's no longer functioning as such and we are, for now, replacing it with a regular drain. We don't have many food scraps because we're pretty good about composting what can be composted and using what can be used.

Also, because the pipes need to be replaced and the disposal is basically 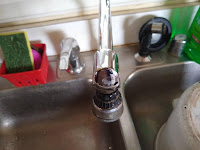 just something for water to drain through, we use buckets under the sink to catch water. Also, the faucet handle, while functional will not stay attached. And the faucet itself drips constantly... which is not only annoying, but expensive.

So, it's time. Past time, really. And I was intending to do this today while the Amanda was at work and the house was empty... but my recently mostly healed foot decided to remind me that I use it a lot getting down on the floor and standing back up... so, it's getting done tomorrow when Amanda's home and can ensure that I don't end up wallowing on the floor like a flipped over turtle.